Art Below Present 'Stations of the Cross' Exhibition
Private View Thursday 15th March (6pm - 9pm)
St.Stephen Walbrook, 39 Walbrook, London, EC4N 8BN.
Exhibition runs until 23rd March 2018,  10am - 4pm Monday to Friday
A series of crucifixion themed works by 14 artists including Francis Bacon, Sebastian Horsley, Ricardo Cinalli and Paul Benney are to be unveiled at London's St.Stephen Walbrook church on Thursday 15th March at the Private View of Art Below's 'Stations of the Cross' Exhibition.
The exhibition includes a sculpture of a life size white imperial stormtrooper from the original 1977 Star Wars film hung on a wooden cross titled 'Crucified Stormtrooper' by Ryan Callanan (RYCA)
St.Walbrook, the historic dome shaped church designed by Christopher Wren in 1672 based in the heart of the City of London will host Art Below's 'Stations of the Cross' until 23rd March and is the third crucifixion themed exhibition to be curated by Ben Moore in support of the Missing Tom Fund set up to find Tom Moore (brother of Ben Moore) who has been missing since 2003.
Curator Ben Moore says 'I welcome artwork that raises debate and ultimately creates more awareness towards finding my brother Tom.' On the subject of 'Crucified Stormtrooper' Moore says 'I think its symbolic that in Star Wars 'The Force Awakens' (2015) we saw a stormtrooper escape from the dark side to come and support the rebellion and the 'crucified stormtrooper' plays into the notion of forgiveness.  It also resonates with the official religion of Jedi which now has 200,000 people signed up!'
Art Below's  2015 'Stations of the Cross' Exhibition at London's St.Marylebone Parish Church included a life-size body cast of Pete Doherty nailed to a cross entitled 'For Pete's Sake' and attracted media attention worldwide.
The First Stations of the Cross Exhibition took place at St.Marylebone Paris Church - 6th March to 17th April 2014 and was showcased on billboard space across the London Underground and included work by Antony Micallef, Mat Collishaw, Polly Morgan, Paul Fryer Alison Jackson and Bran Symondson.
For Interview requests, images and sales requests please contact: info@artbelow.org.uk / 0208 948 4491 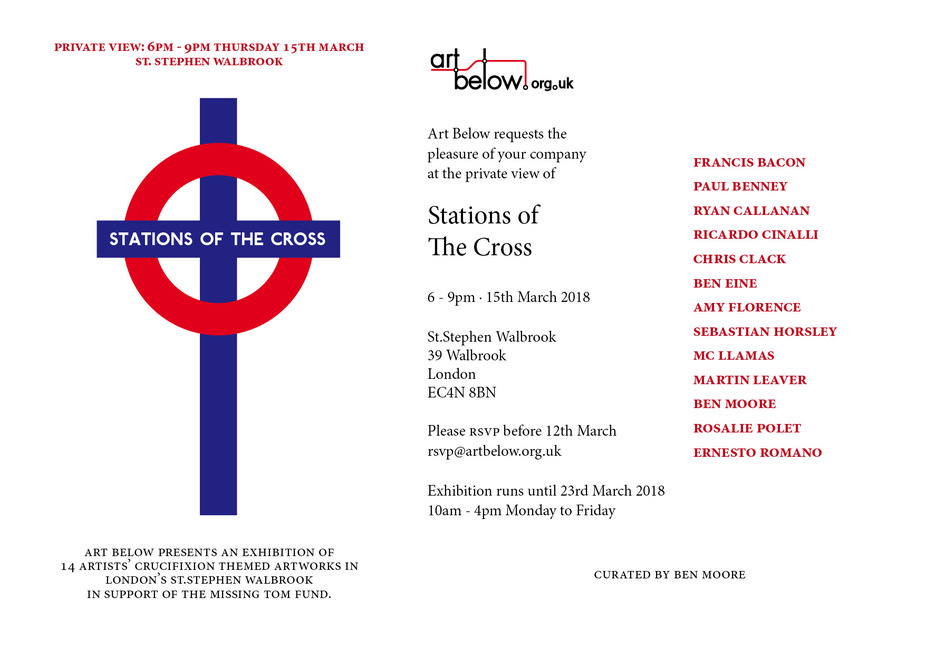 The Missing Tom Fund
Proceeds from the 'Stations of the Cross' exhibition go to the 'Missing Tom' fund, which was started up specifically to raise money to support the search for Thomas Moore. Tom left his family home in 2003. He was aged 31 years old. His friends and family have not heard from him since then. Now 15 years on, with the support of the Missing People Charity his family continue to search for Tom.  www.missingtom.com
Ben Moore, Founder of Art Below, has had over 10 years experience working with artists, museums, charities and arts organisations, initiating and managing partnerships to deliver new public arts projects. In 2006 he founded public arts organisation Art Below.  He has produced and curated public exhibitions in London, Tokyo, Berlin, and Los Angeles working with high profile international and British artists including Turner Prize Winners and Royal Academicians.  Recent projects and  exhibitions curated by Moore include Art Wars, Stations of the Cross, and 'Queen Themed'. https://en.wikipedia.org/wiki/Ben_Moore_(curator)
'Stations of the Cross' 2014 was the first crucifixion themed exhibition curated by Ben Moore. The exhibition took place at London's St.Marylebone Paris Church - 6th March to 17th April 2014 and was showcased on billboard space across the London Underground and included work by Antony Micallef, Mat Collishaw, Polly Morgan, Paul Fryer, Wolfe Leinkewicz, Sebastian Horsley, Alison Jackson and Bran Symondson.  See here
'Stations of the Cross'  2015
A life size marble statue of Pete Doherty being crucified was unveiled at London's St.Marylebone Parish Church on Thursday 19th February alongside other works depicting the Passion of Christ by artists including Paul Benney, Nasser Azam, Angelica Cayzer, Robin Mason, Wolfe Lenkiewicz and Charlie Mackesy.
The Lifesize sculpture titled 'For Pete's Sake' went on sale for Ł33,000 and was made as a collaboration between Pete Doherty and his artist friend Nick Reynolds assisted by Schoony who specialises in life casts.  Exhibition ran to 17th March 2017. This was the second crucifixion themed exhibition to be curated by Ben Moore in support of the Missing Tom Fund.  See here
RYCA
Ryan Callanan (RYCA)  graduated from art school in 2002 and was inspired to create his first print Ona Islam after visiting the acclaimed London exhibition of Banksy works, 'Santa?s Ghetto' in 2006. Other sources of inspiration include cults classic Star Wars franchise, Pop Art and the Renaissance.
Drawing inspiration for his career as a 3D sign writer, RYCA incorporates a wide use of materials including resin and glass into his sculptural pieces.
RYCA?s   'Acid Cup' made headlines in 2014 when he made a handcrafted replicate of the World Cup trophy, to coincide with the 2014 tournament in Brazil. Big Beat DJ and Brighton hero Fatboy Slim loved RYCA's sculpture so much he took one on tour with him as he played a host of huge gigs around the country.
He has exhibited worldwide and collaborated with a number of well respected artists including Ben Eine, David Walker and Stik. In 2006 He created Reservoir Troopers (red) that sold out. www.instagram.com/ryca_artist
Francis Bacon
On show is a pastel drawing that Francis Bacon donated to his Italian lover Cristiano Lovatelli Ravarino between 1977 and 1992.  Many of the works are concerned with the image of crucifixion often referenced by Francis Bacon in his art to embody life?s horror as he could not find a subject as valid to embrace all the nuances of human feelings and behaviours.  Francis Bacon Collection. The Francis Bacon Collection of the drawings donated to Cristiano Lovatelli Ravarino.
www.francisbaconcollection.com
St. Stephen Walbrook  is a church in the City of London, part of the Church of England's Diocese of London. The present domed building was erected to the designs of Sir Christopher Wren following the destruction of its medieval predecessor in the Great Fire of London in 1666. It is located in Walbrook, next to the Mansion House, and near to Bank and Monument Underground stations. https://ststephenwalbrook.net