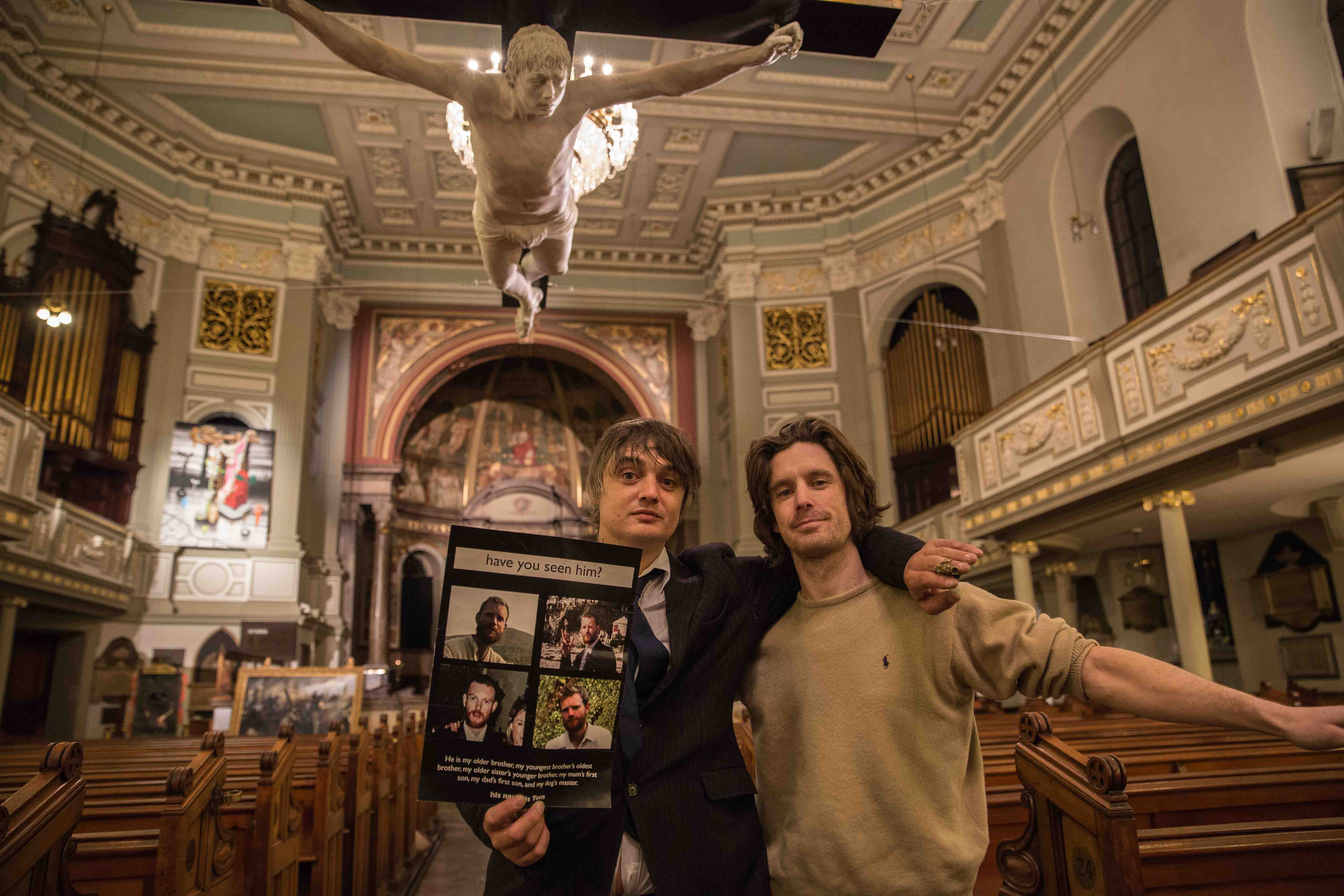 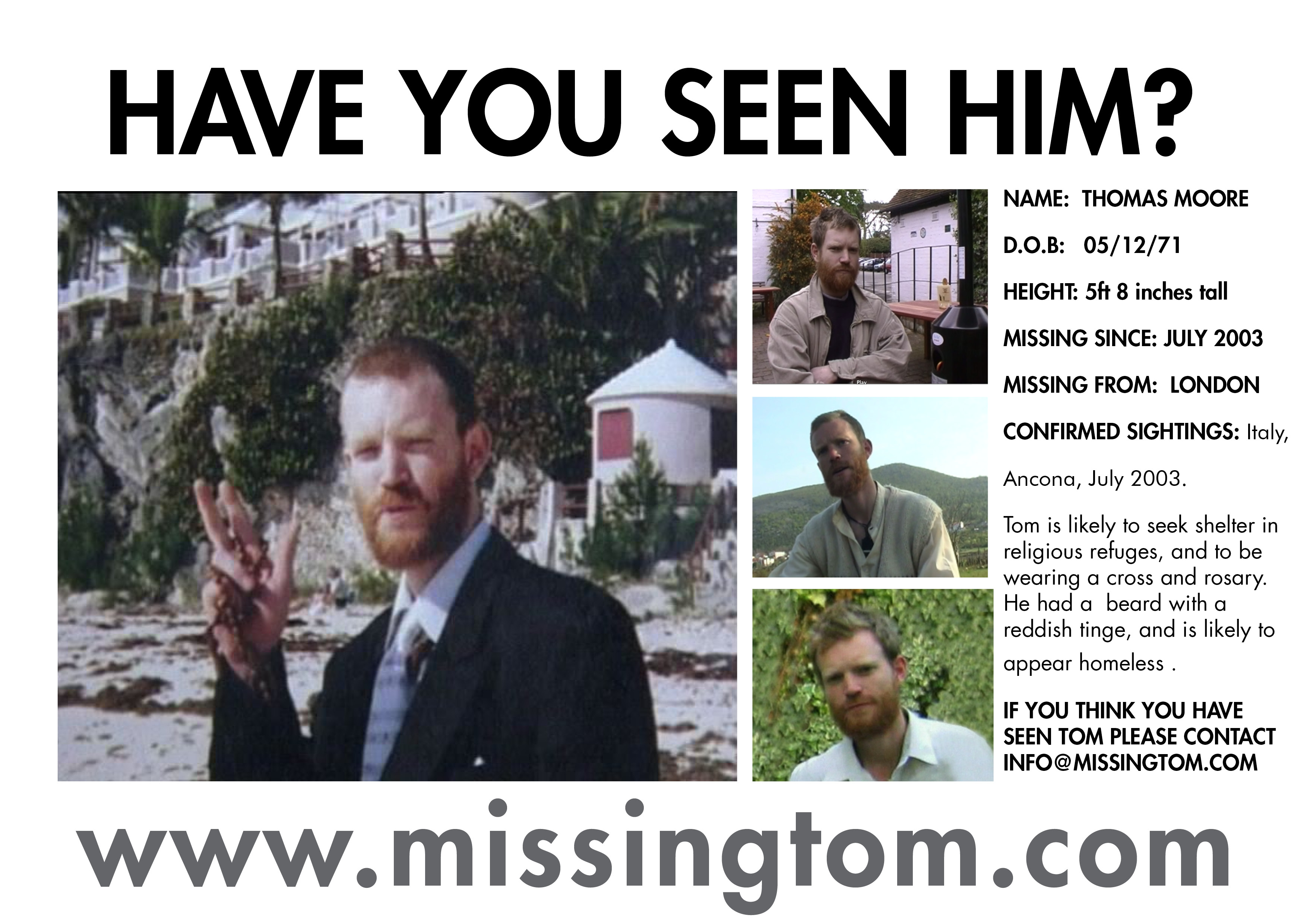 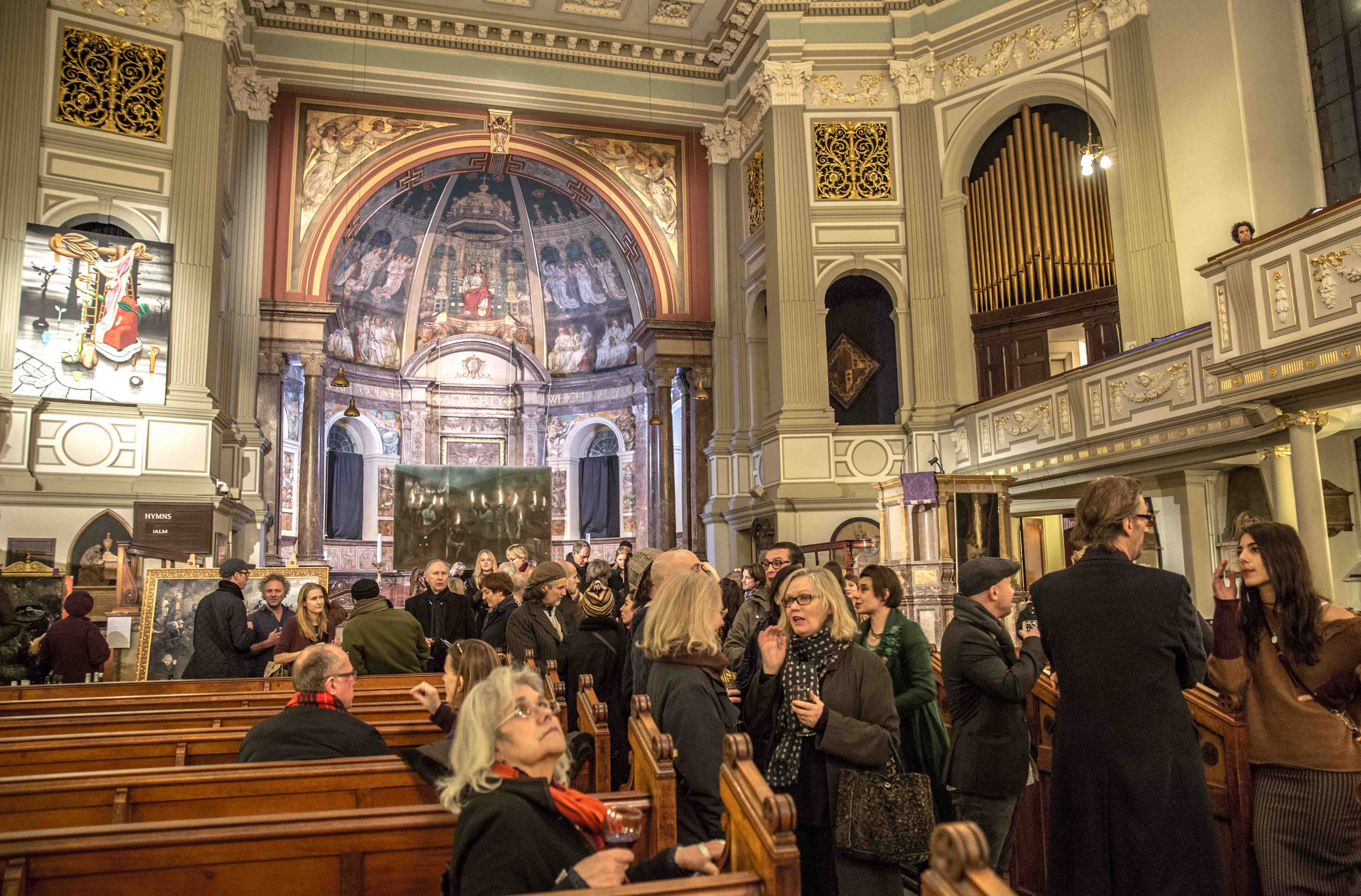 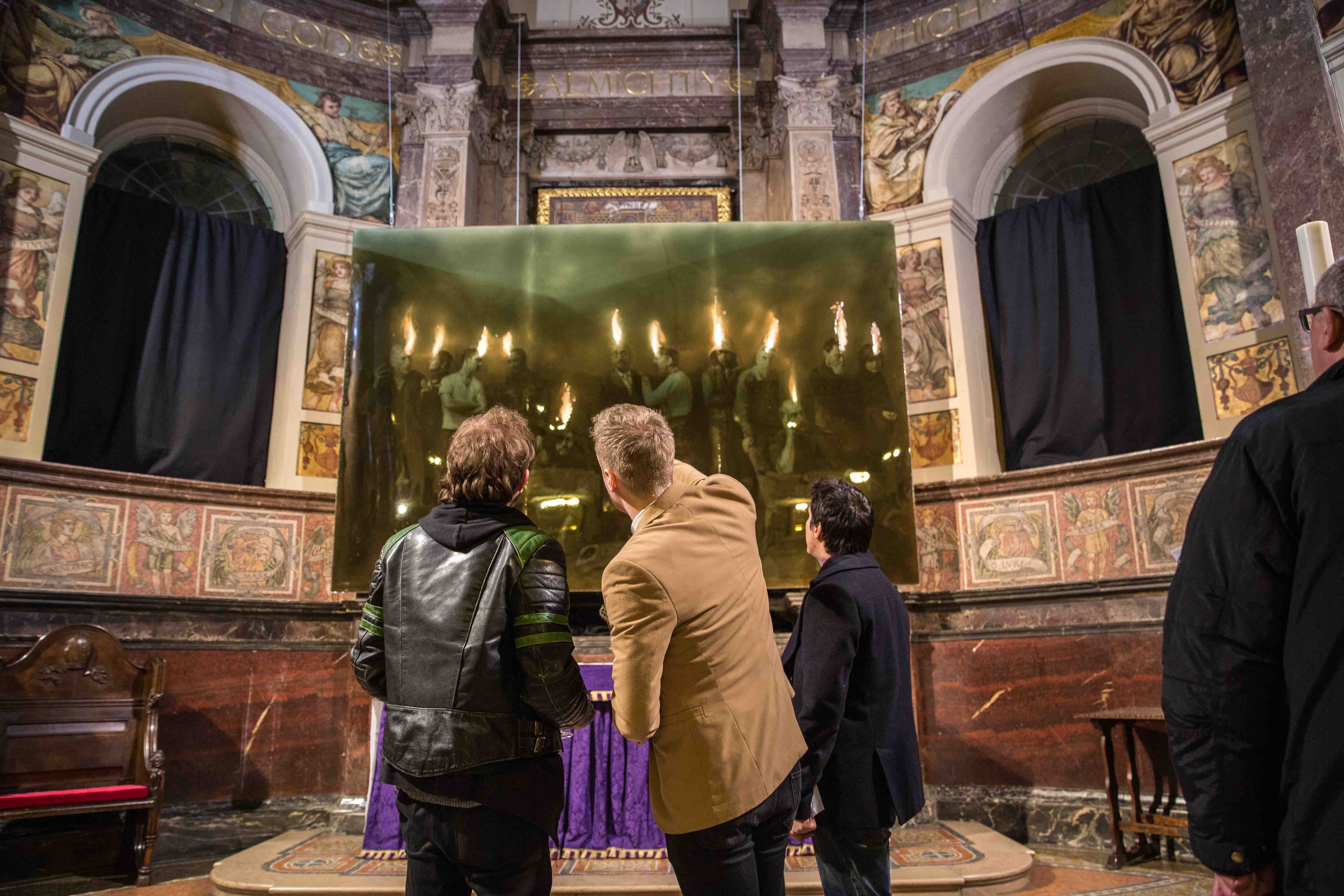 The subjects of the picture are all friends and contemporaries of the artist, and are depicted as the Apostles with Pentecostal flames hovering above them.  The reflective surface allows the viewer to appear to be part of the group in an extraordinary and thought-provoking way. 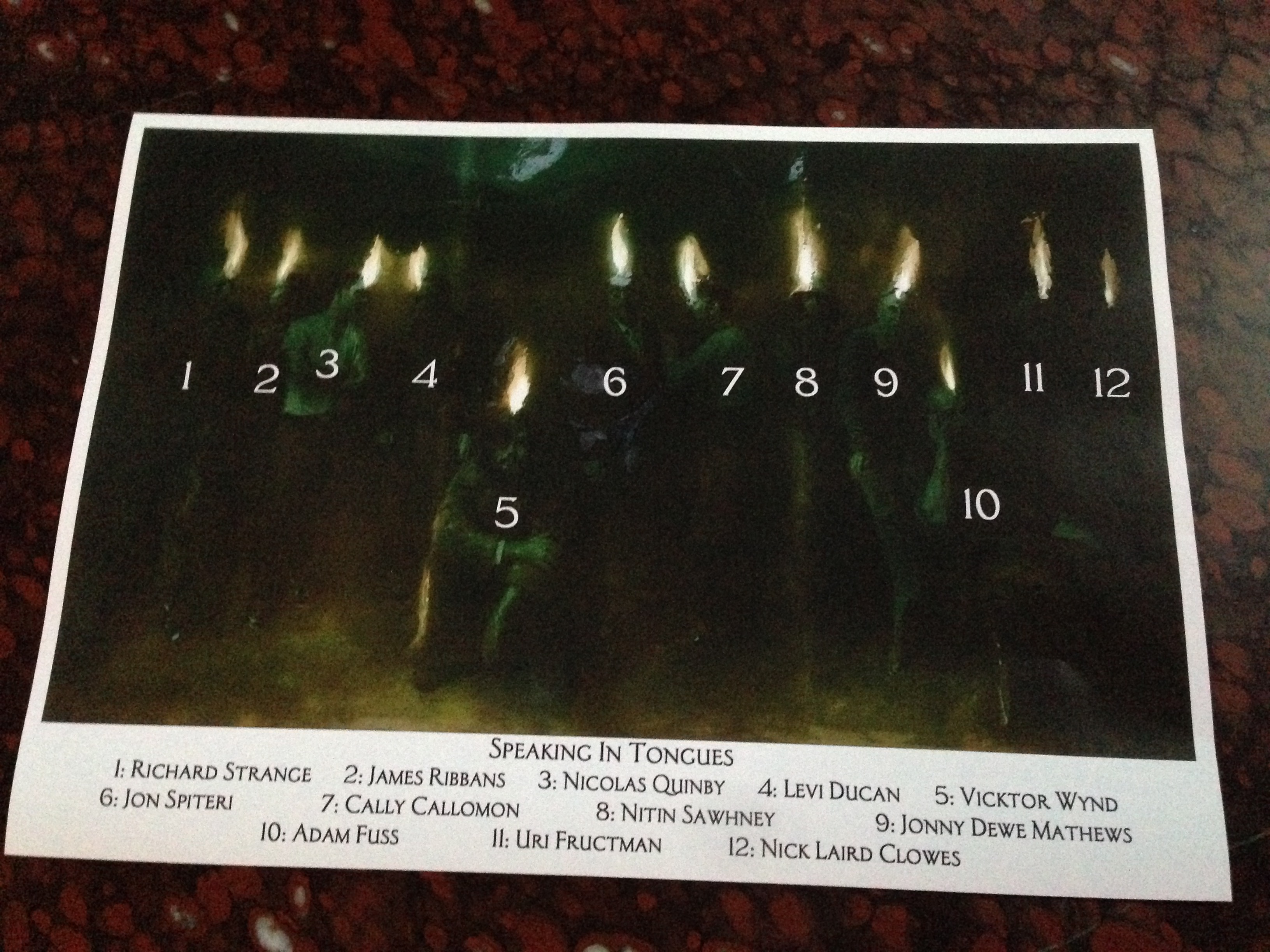 Benney's depiction of light emanating from the head as an animation of the spirit has echoes in the imagery of many different religions such as The Mandoria in Asian art, The Pillar of Fire in Judaism, the Aureole in the sacred art of Ancient Greece, Hinduism, Buddhism, Islam and Christianity, and is a particular fascination for Benney. 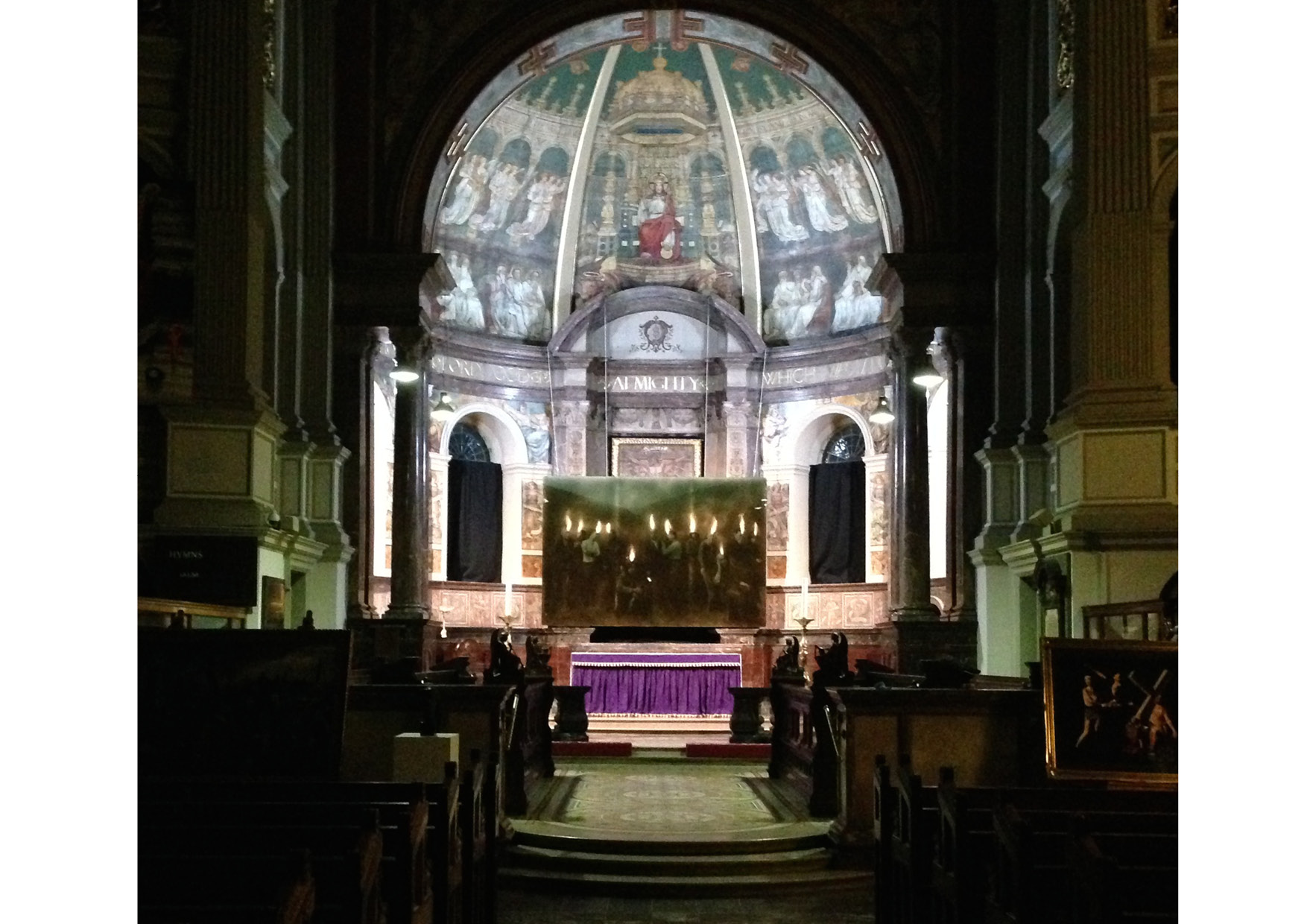 Speaking in Tongues follows on thematically from the major exhibition of Benney's widely publicised show Night Paintings at Somerset House, London, where he is an artist-in-residence.  The work brings together Benney's talents as both a contemporary artist and one of the UK's most celebrated portrait painters.  http://leicestercathedral.org/ 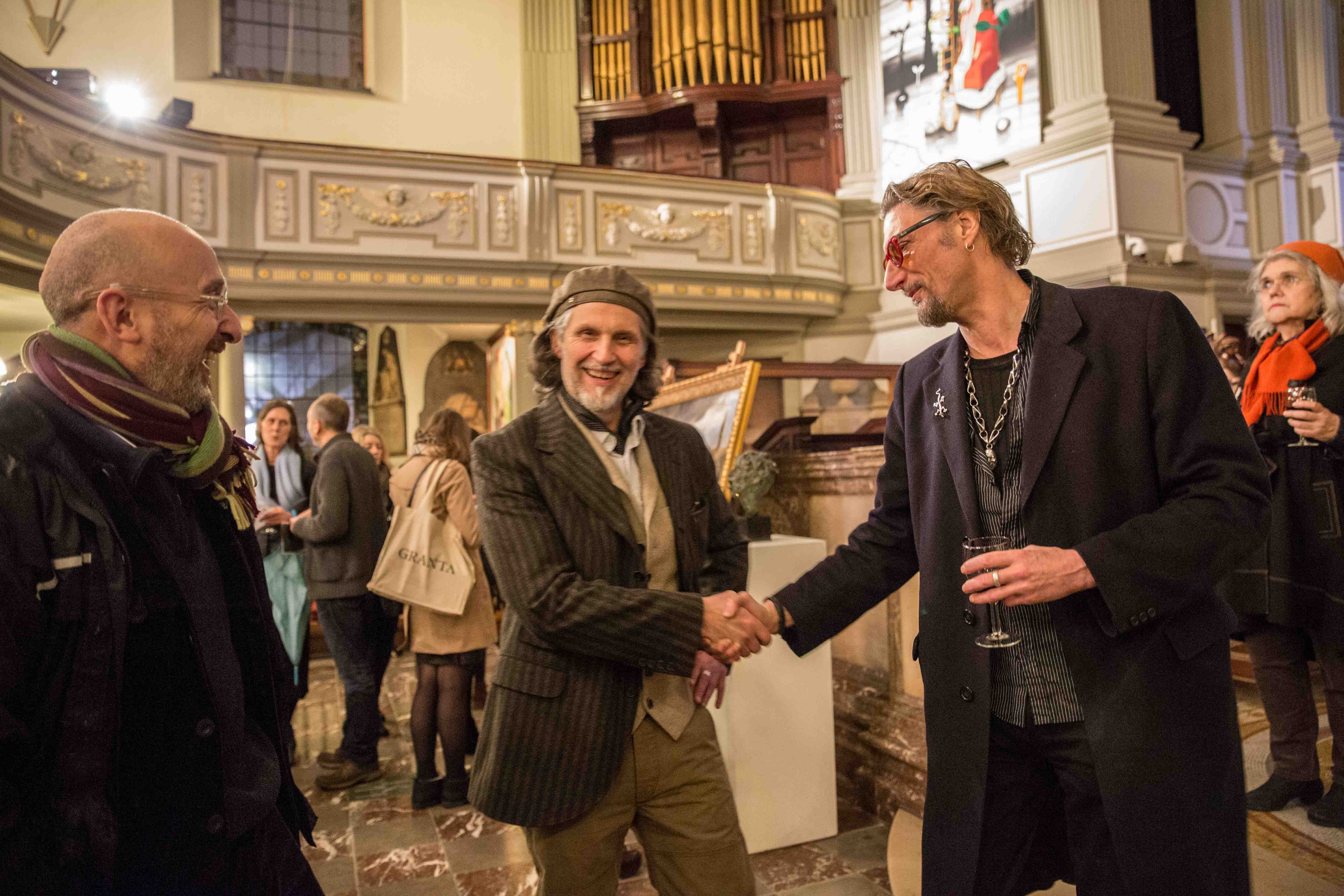 'For Pete's Sake' A Life Size sculpture by Nick Reynolds and Schoony depicting singer Pete Doherty on a crucifix. 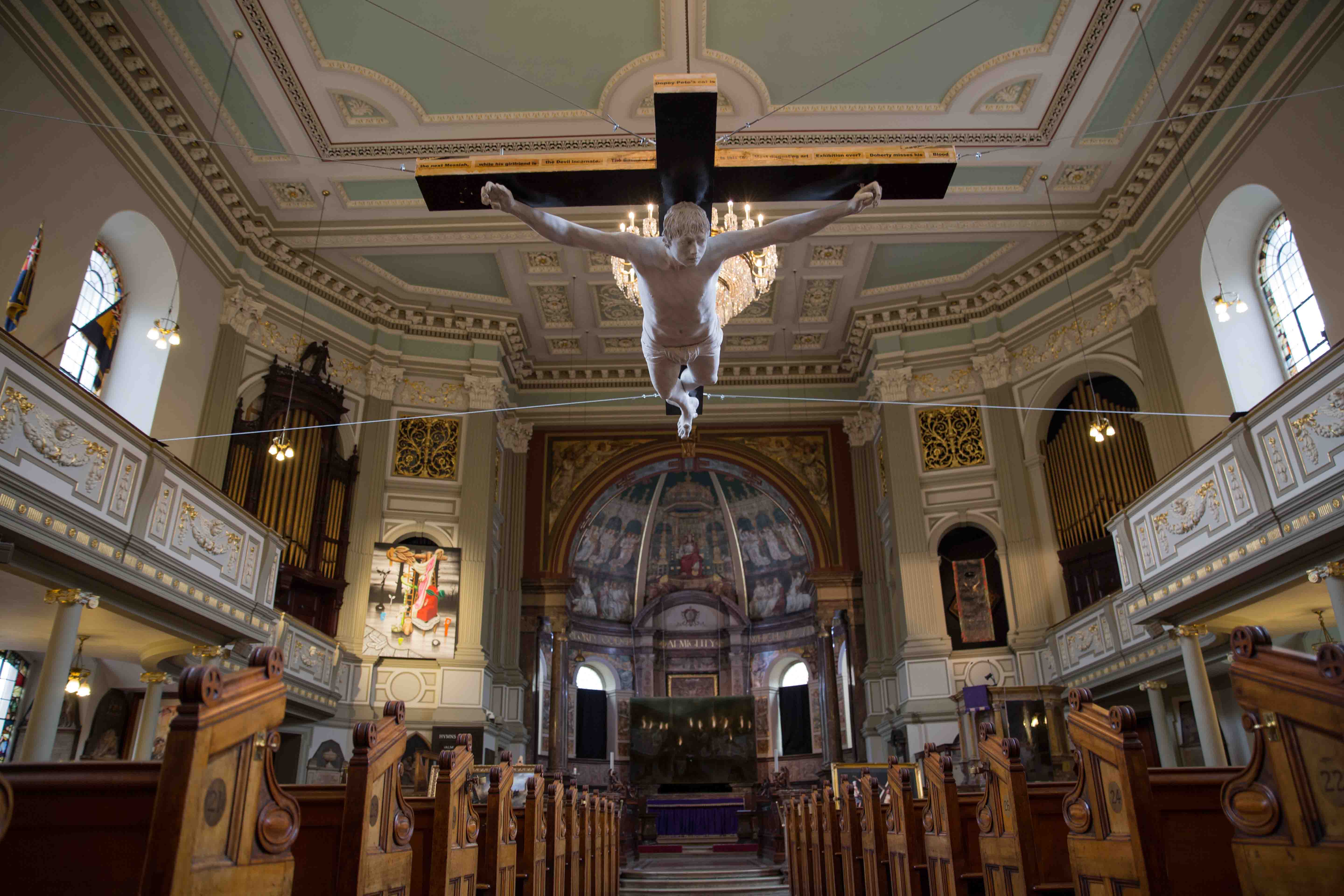 For Pete's Sake is suspended horizontally above the knave, with thick nailheads at stigmata positions holding Doherty up on a heavy, perfectly cut cross. It's the first thing you see coming through the door. Unlike the cross, Doherty's form is light, and it actually feels like he's swooping down on you. His figure is pure white, like someone without sin, reinforced by his blank but open eyes, as in so many classical statues. In the sculpture's angle and clarity, it compares with a Salvador Dali masterpiece, Christ of St John of the Cross (1951), now in Kelvingrove, Glasgow. But you don't see the Christ face in Dali's work, and you do with Doherty. His expression is not one of agony or prayer, but rather a slightly troubled and curious look, perhaps not quite understanding what's going on. Unlike the other works, the materiality and colours of For Pete's Sake are entirely compatible with the interior of the 1817 baroque church (designed by Thomas Hardwick). The overall effect is stunning, beautiful, and in Doherty's face, subtle and sad. There's one more crucial detail to come . . . 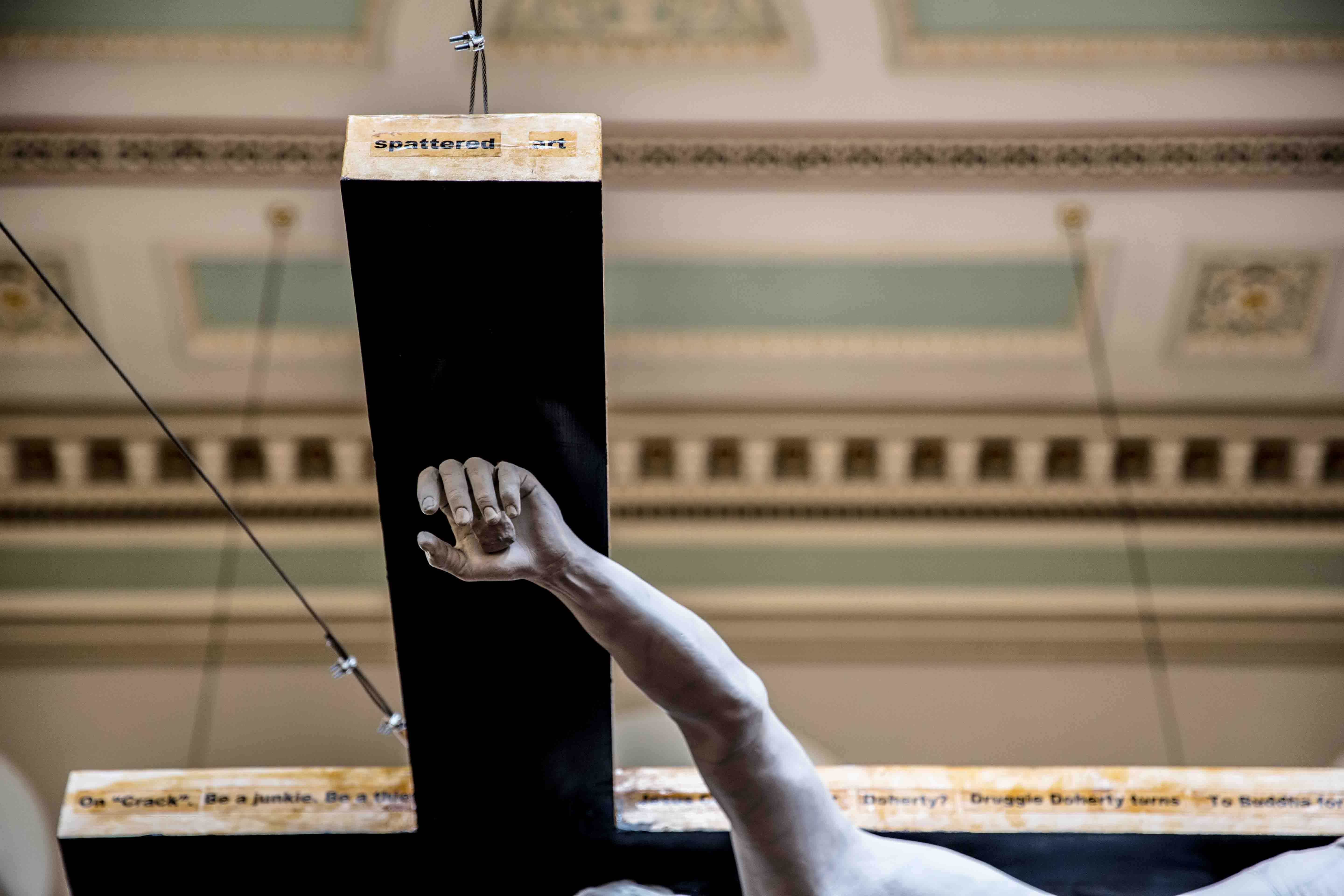 For Pete's Sake may be blasphemy to some, but not, apparently, here. 'No-one's said anything' said St Marylebone's verger, when asked if any outrage had been expressed. 'Not like last year', he added. Last year's Stations of the Cross had a naked woman on a cross and Paul Fryer's black man in an electric chair.

Mainly, the UK has long been un-hung up about its Christian icons. When John Lennon sang 'the way things are going, they're gonna crucify me' in 1969, some US radio stations banned the song, but it raised hardly an eyebrow in the UK. It's strange how some Americans can be so touchy about religion, yet fervent about guns. Lennon was shot dead in Manhattan in 1980. 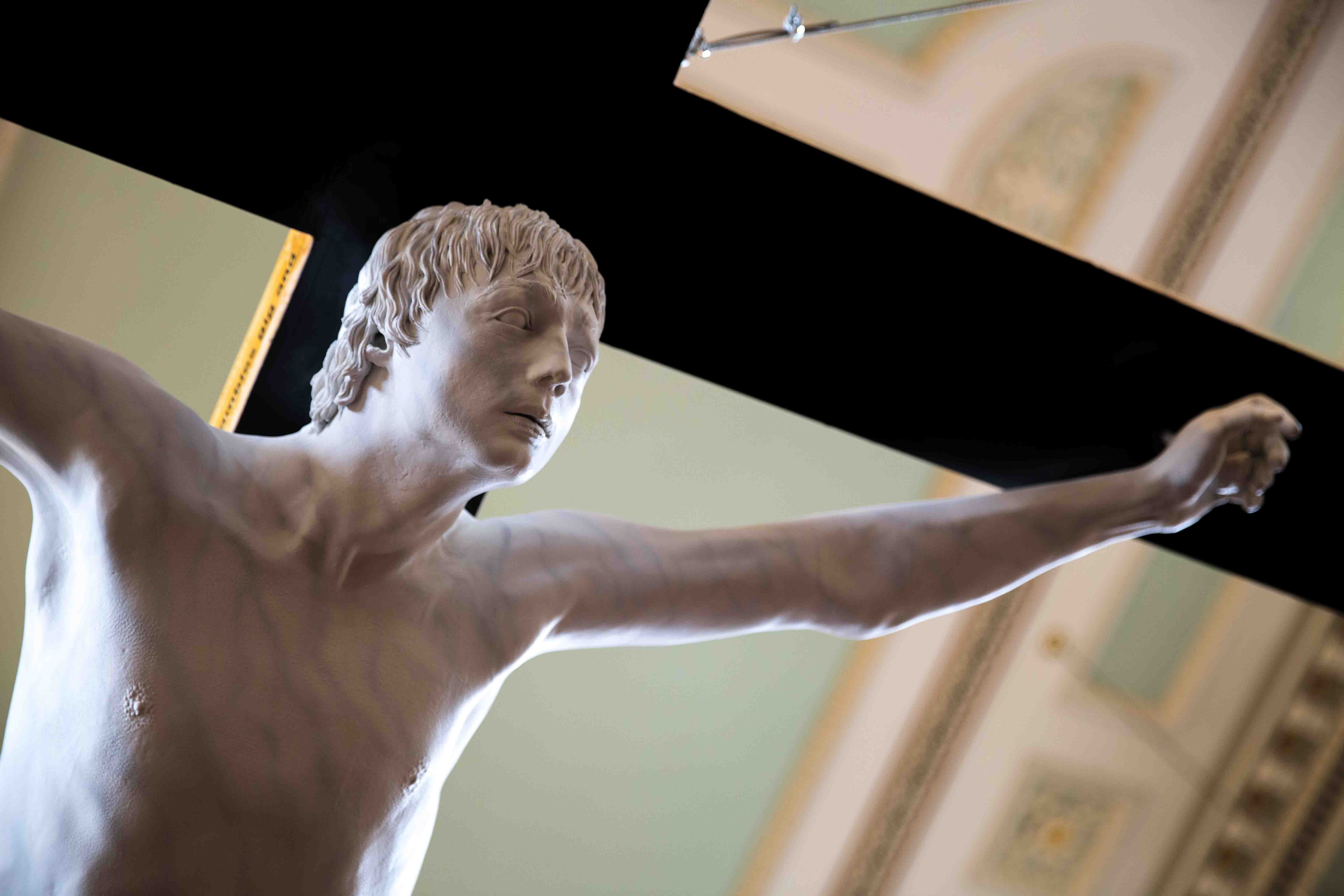 The UK has other ways of crucifying people, particularly celebrities. The gutter press (tabloid newspapers produced by an opportunistic conspiracy of cads and flesh-mongers) are masters at it. They first pounced on Doherty for apparently chasing the dragon in 2005, and, out for blood, they probed and milked the bizarre twists in his drugs usage for years. His dalliance has involved spells of rehab and jail, but the sheer viciousness of the scrutiny and the headlines may well have been worse. Echoes of these are cut and plastered around Reynolds' cross itself - perhaps referencing Jamie Reid's seminal Sex Pistols artwork - but here there are just capitals in the same headline typeface, saying things like JUNKIE SCUM, WEED TO PENGUINS, ON ?CRACK? or THE BALLAD OF MOSSY AND CRACKHEAD. That last one is a riff on the title of the afore-mentioned Lennon song, and refers to Kate Moss, the iconic superstar model who Doherty almost married.

The British press love a build-'em-up-knock-'em-down strategy when they have someone in their sights, and when the subject seems to be in self-destruct mode, it's like the pizza delivery comes right to their grubby desks. For the British press, Doherty was a dream come true. But you might say Jesus also self-destructed - the confusingly varying Gospels report that he put up no self-defence at his trial. And that raises the question, who is For Pete's Sake all about - Jesus or Doherty?  www.wildculture.com/article/nailing-very-naughty-boy/1488 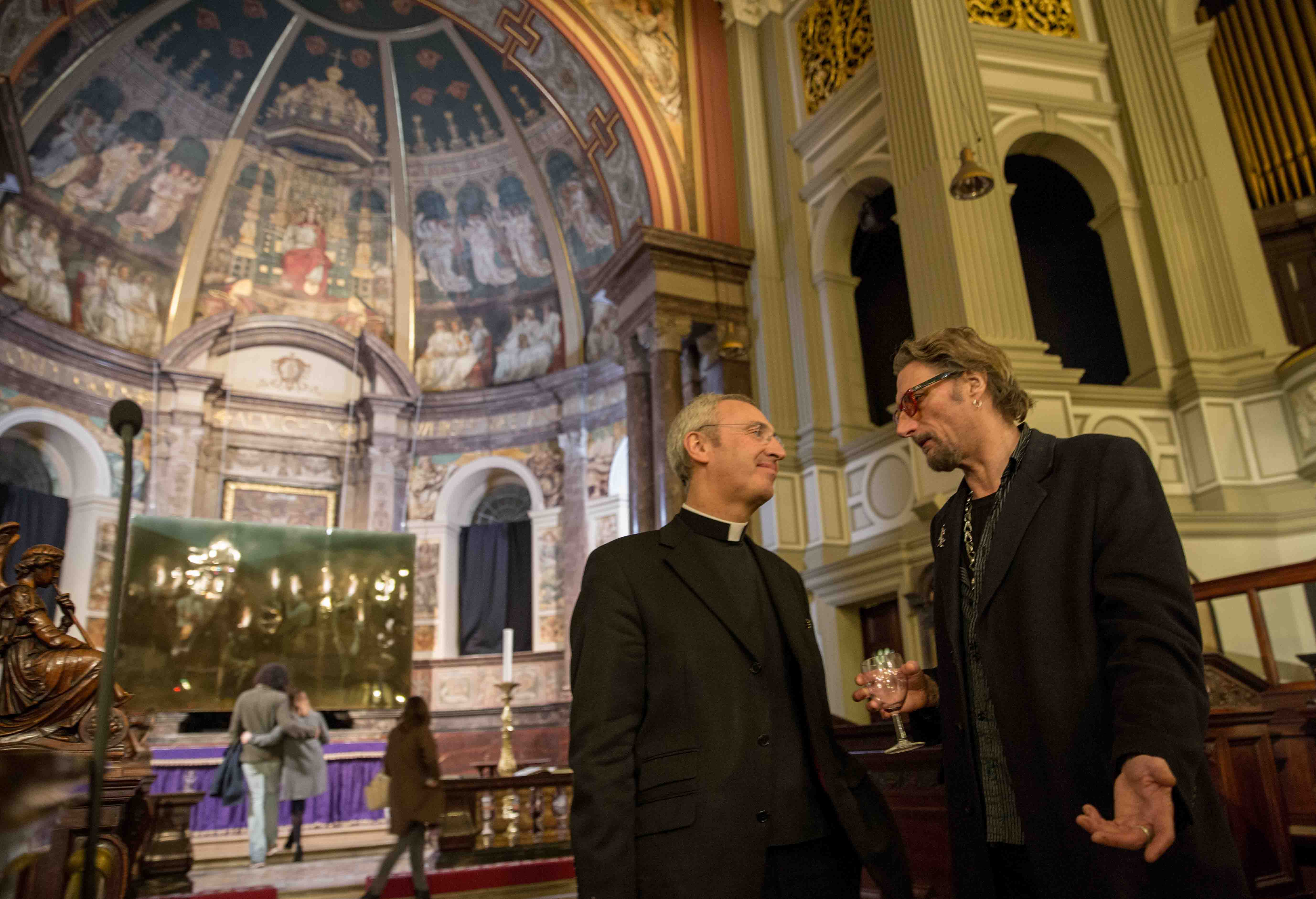 Robin Mason's 'Deposition After Rubens' (below) 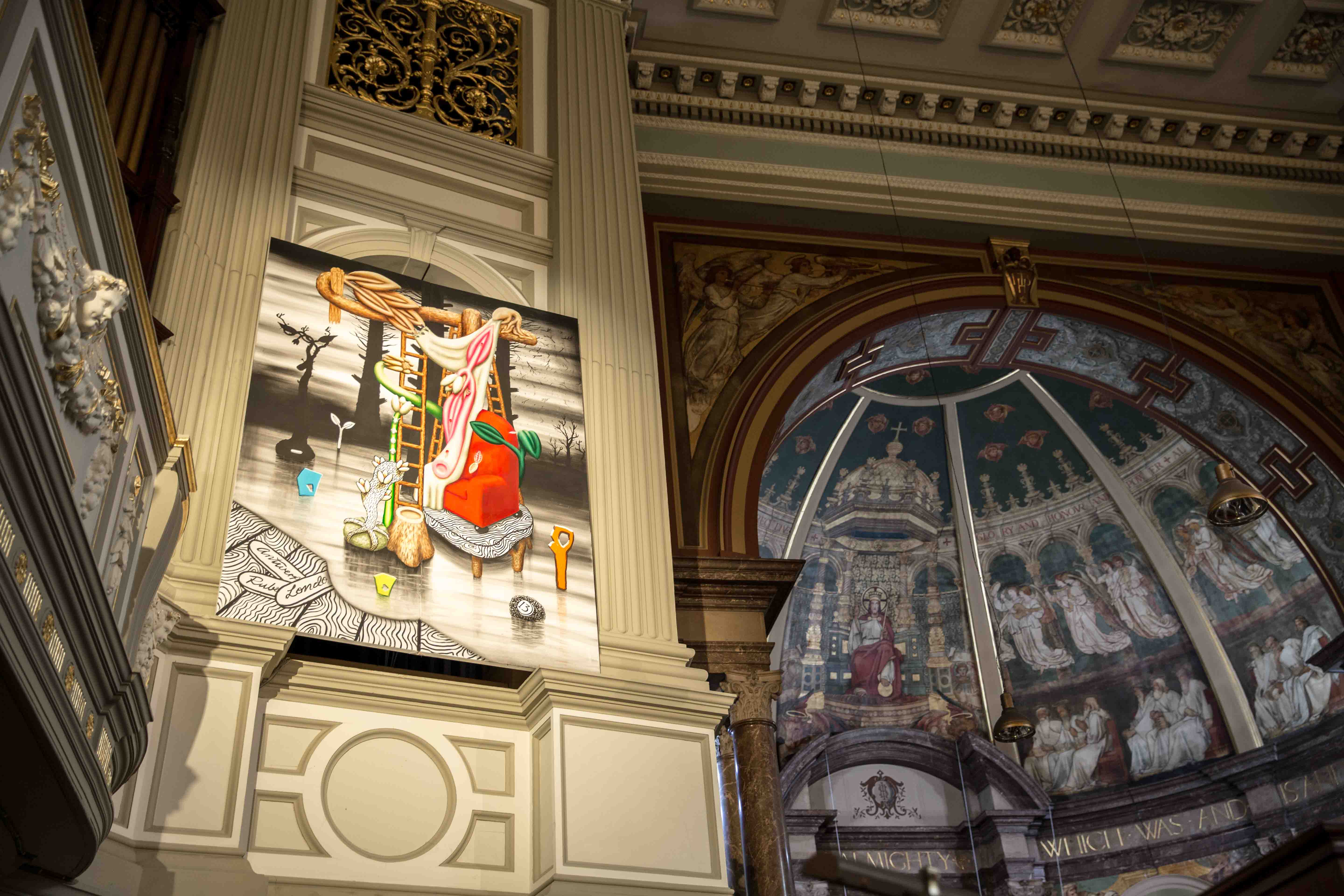 In his entire body of work Mason's reference with the past interweaves parallel journeys between the art historic and the personal. A consistent re-imaging of theatrical backdrops and stage-like structures inhabited by amorphic tree and flower forms aligns the work with both surrealism and Northern European medieval images. This stage-like presence is a reflection of childhood performances on the stage, the theatricality of high-church ceremony and the fairground paintings of his early life in Porthcawl.     http://robinmason.net/ 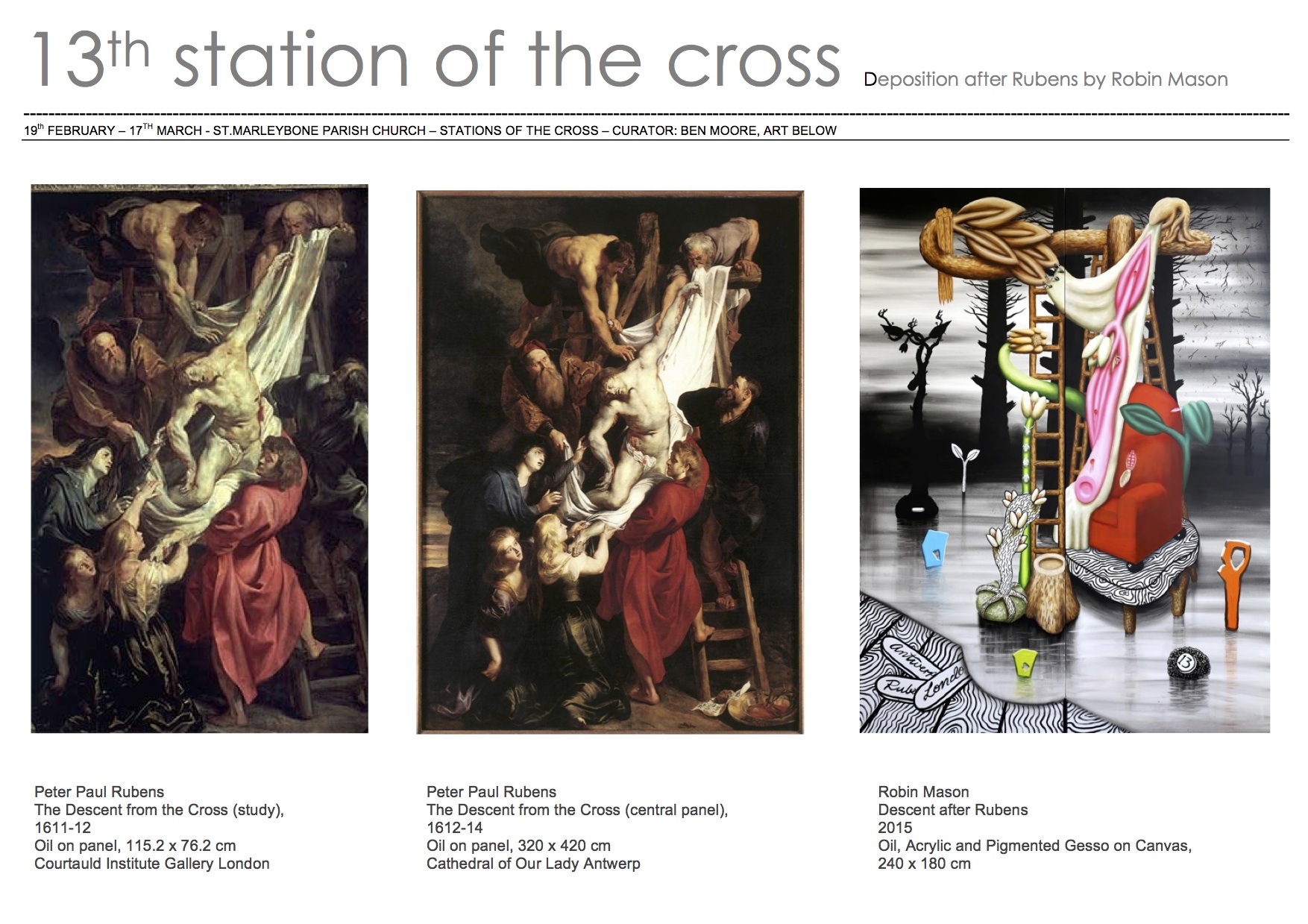 'It was for freedom' by Charlie Mackesy, Oil on a prison door (below) 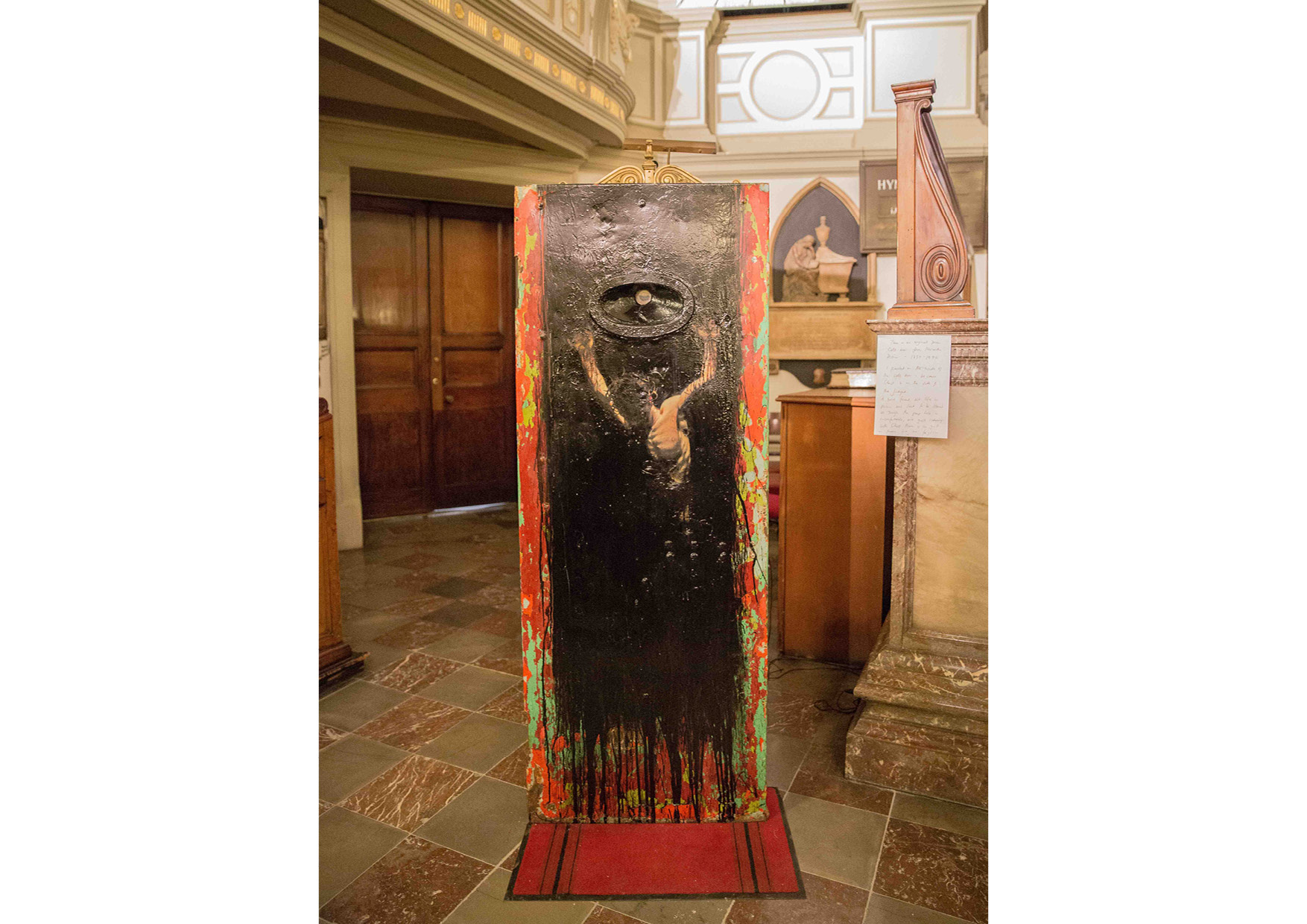 This is an original prison door from Norwich prison 1850 -1970.  This work is about judgement and forgiveness.  With Christ there is no guilt or shame. We are forgiven. Charlie Mackesy 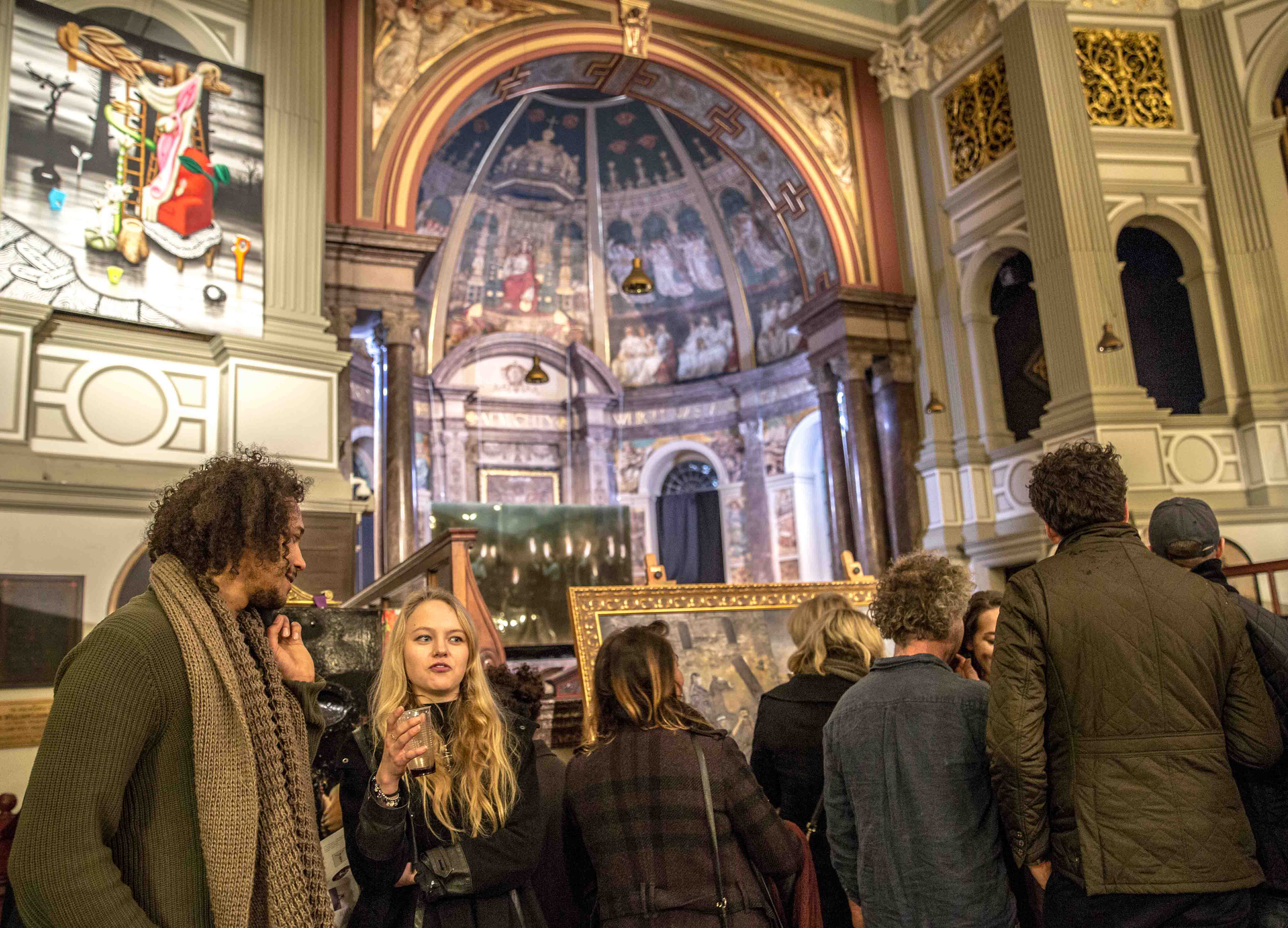 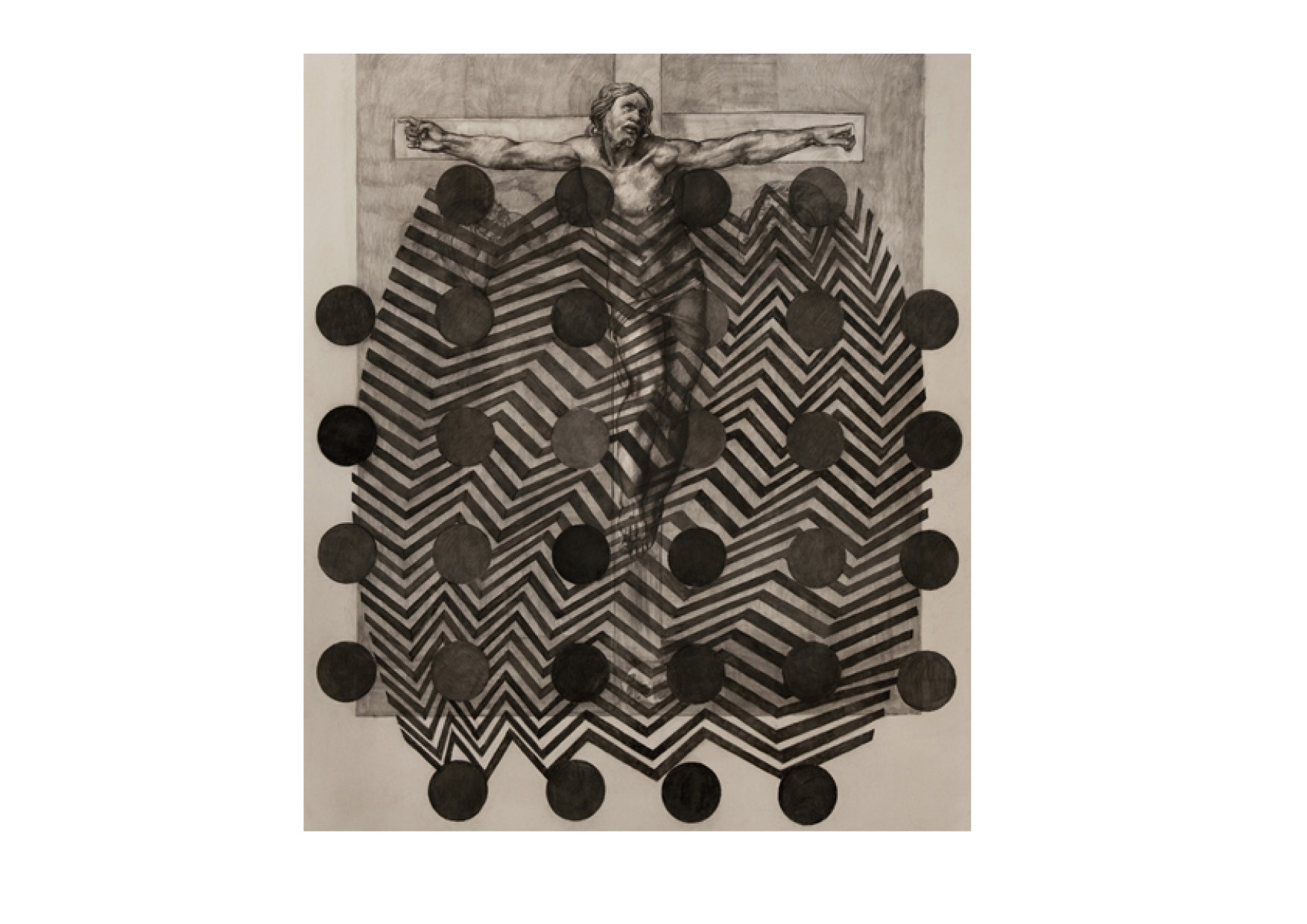 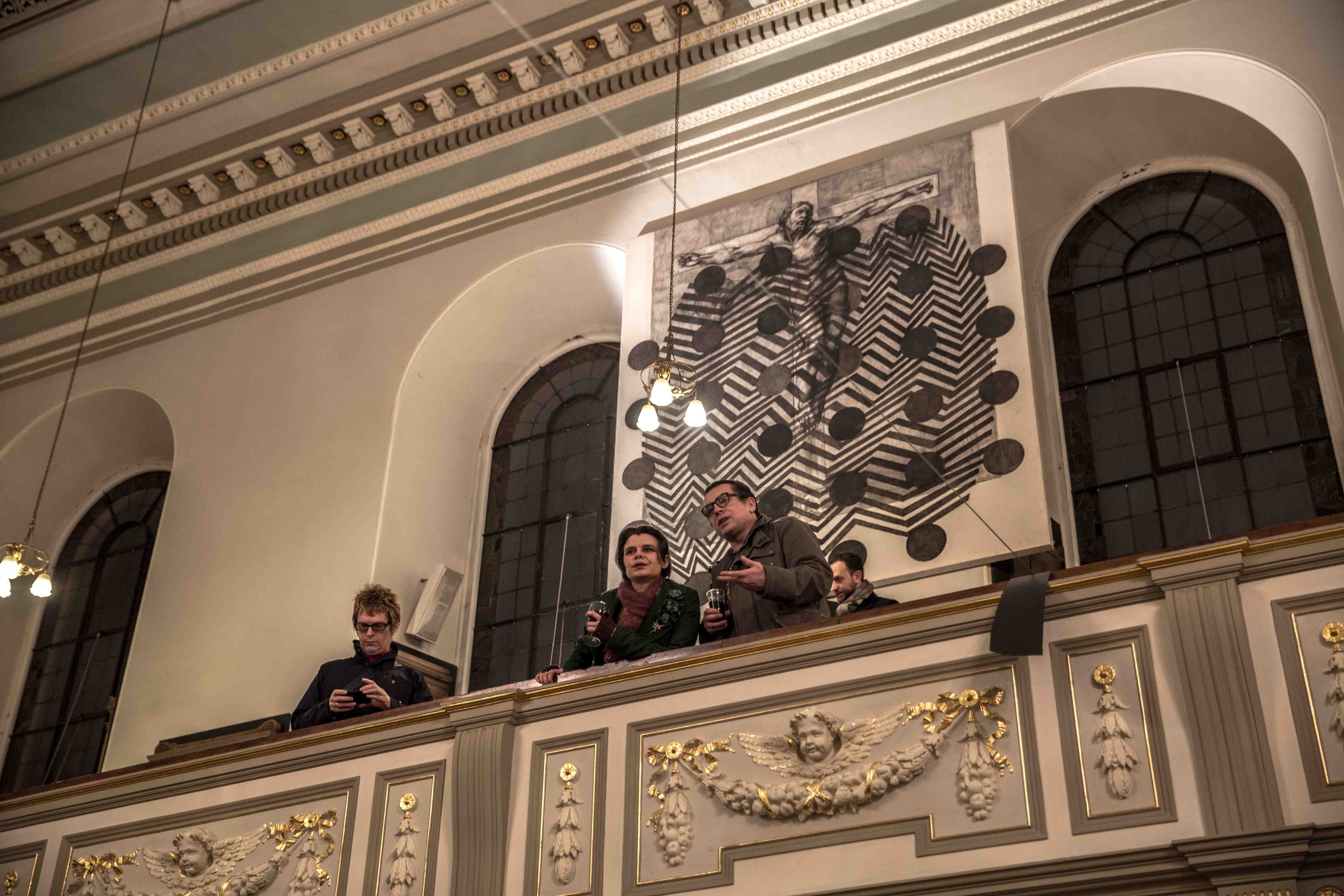 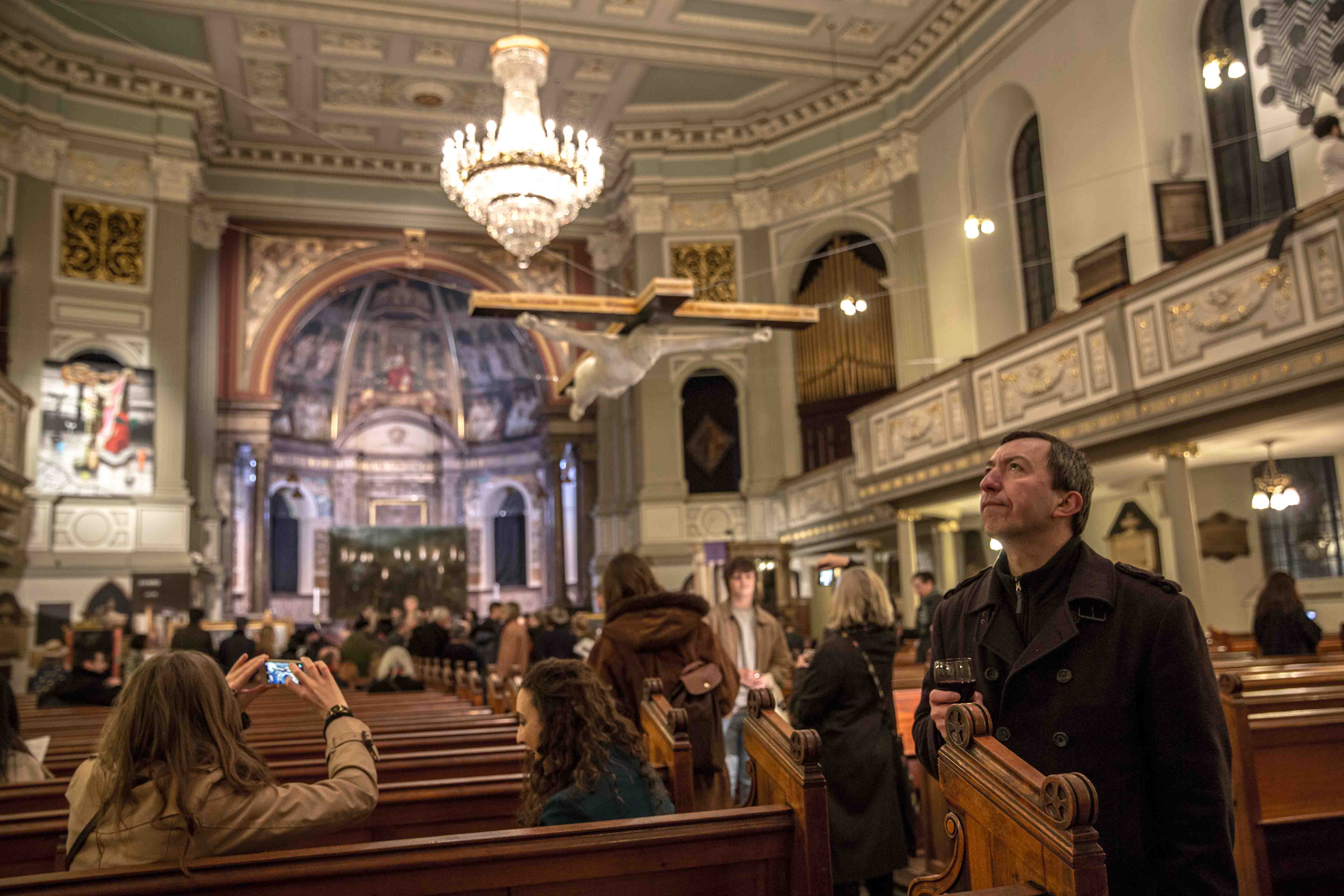 'Figure xii' by Nasser Azam (below) 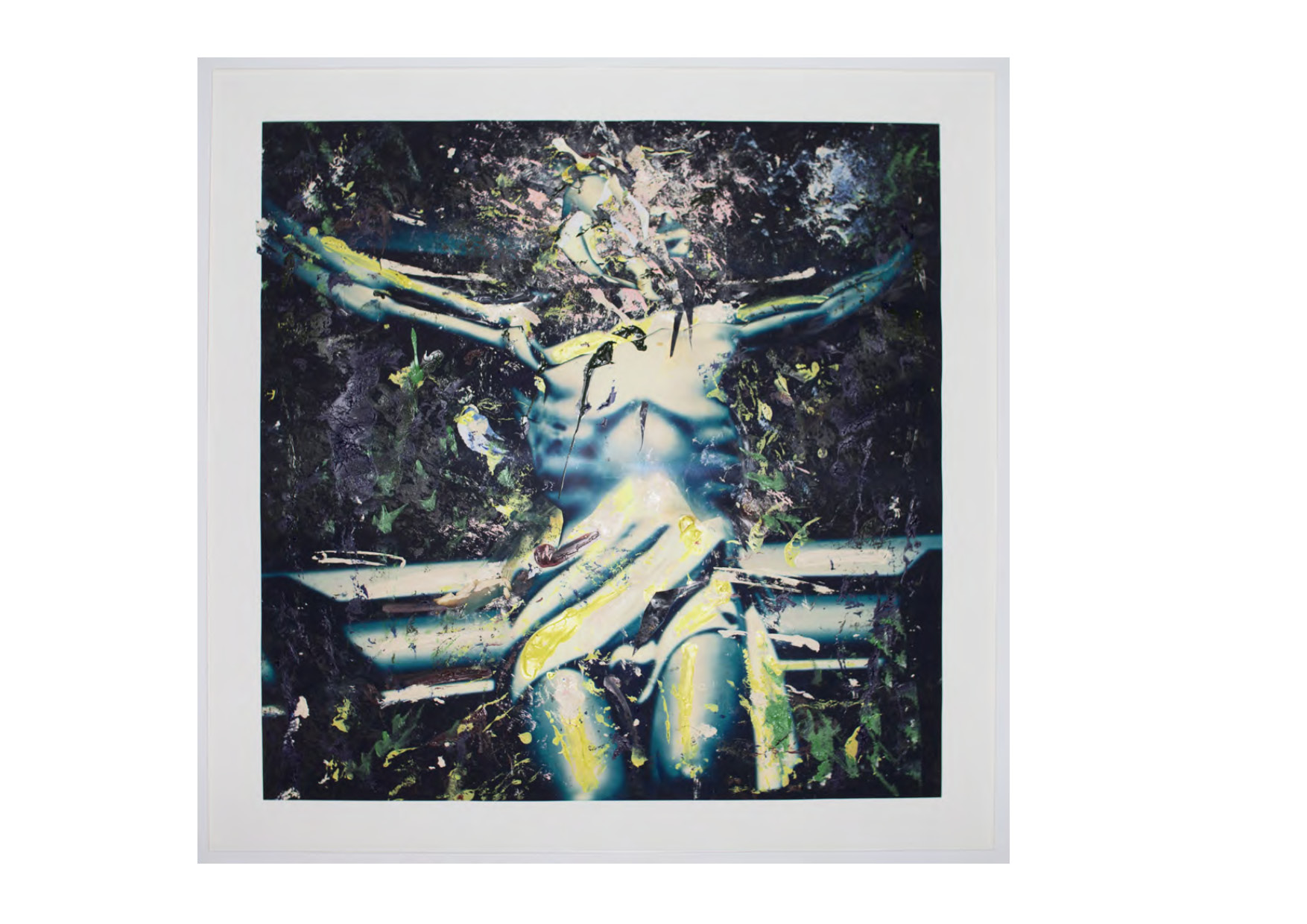 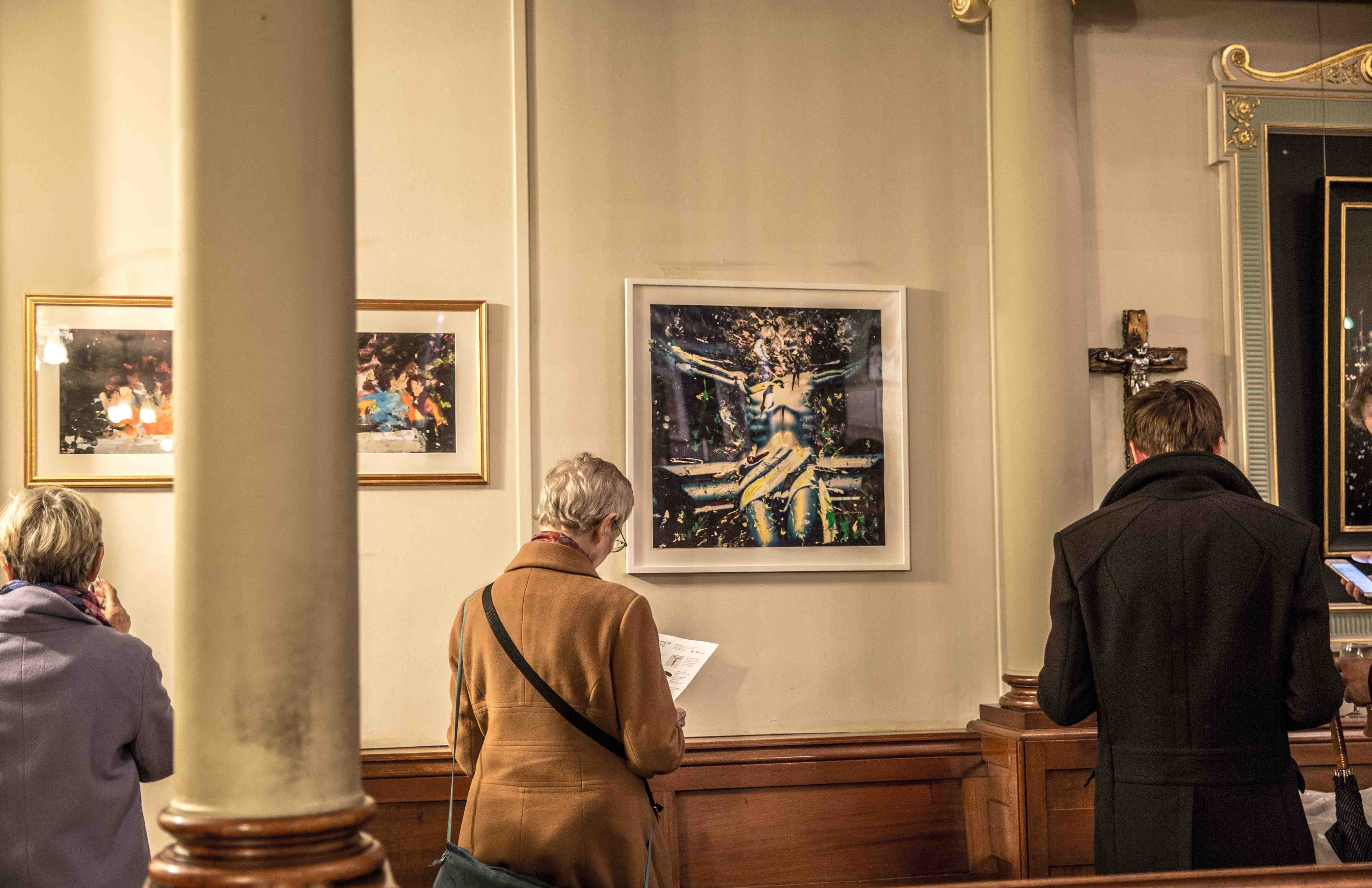 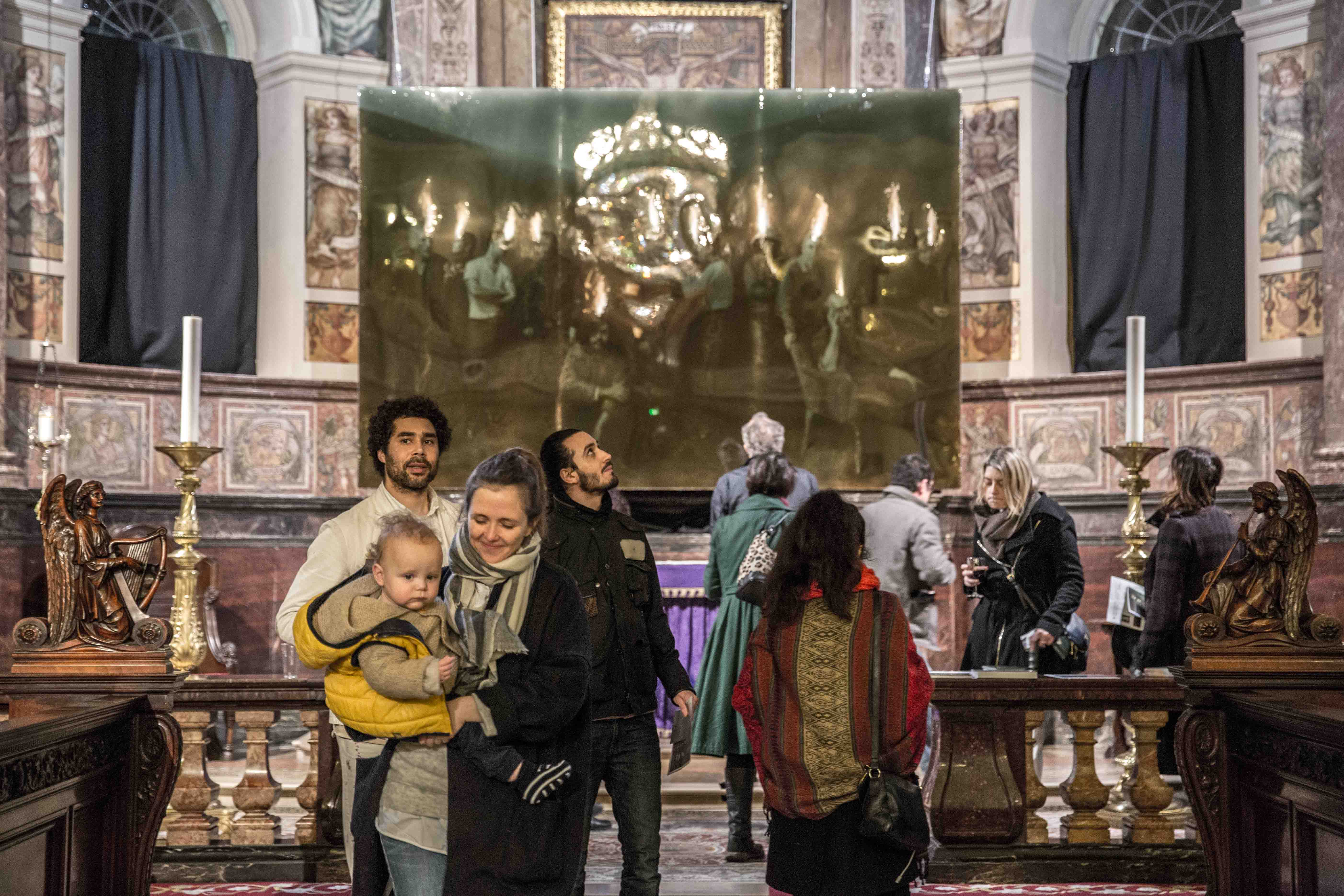 'Breakdancing Jesus' by Cosmo Sarson (below). 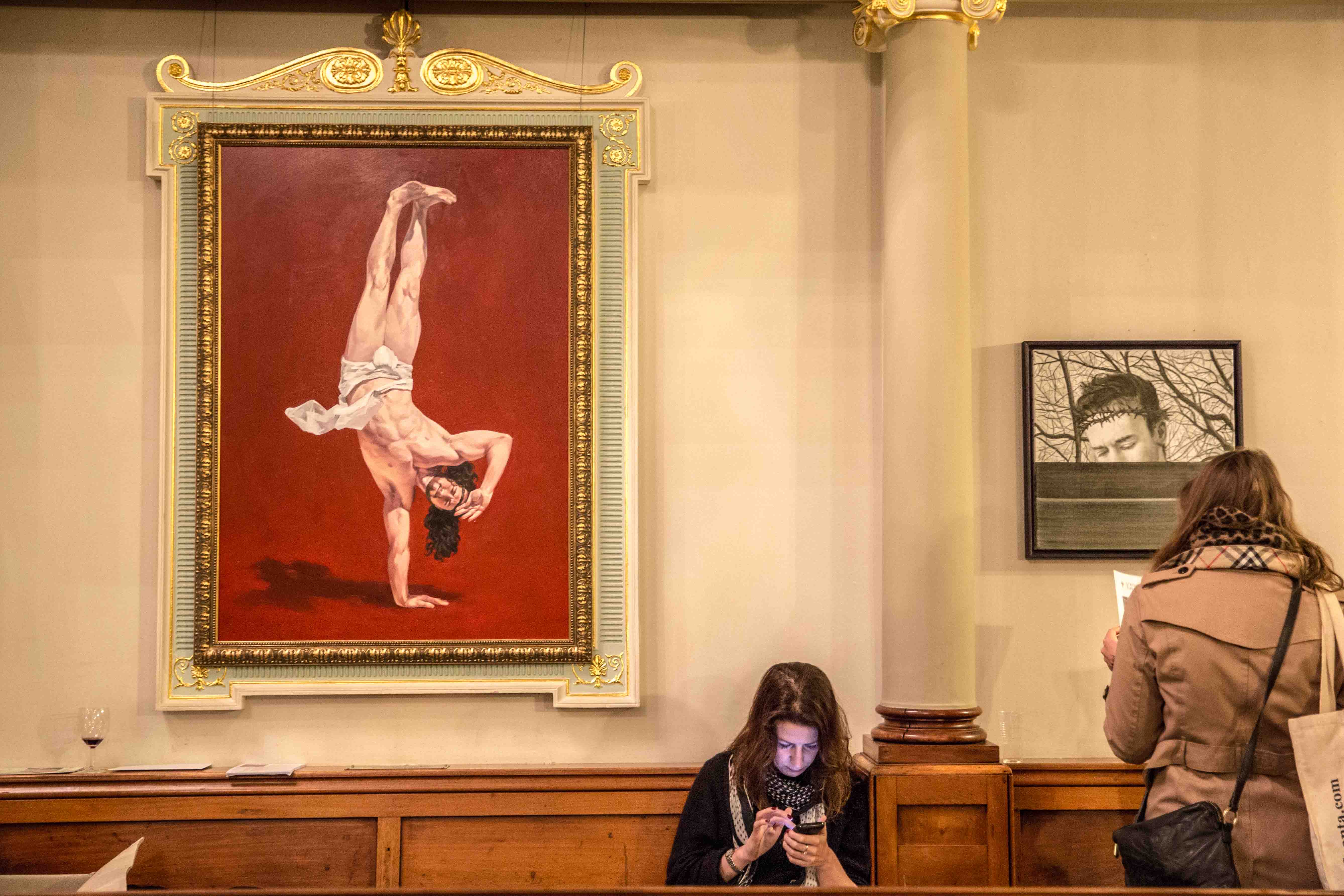 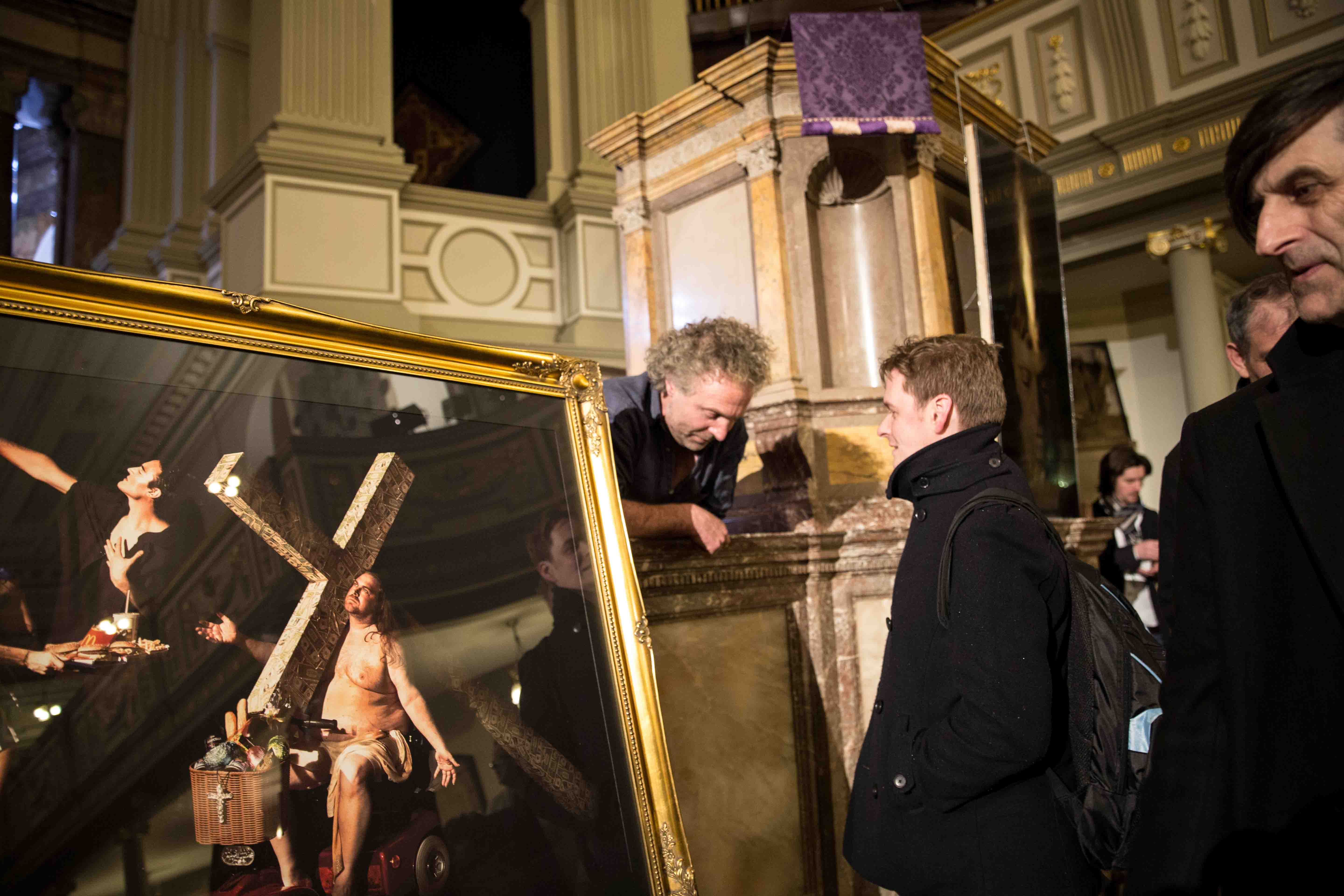 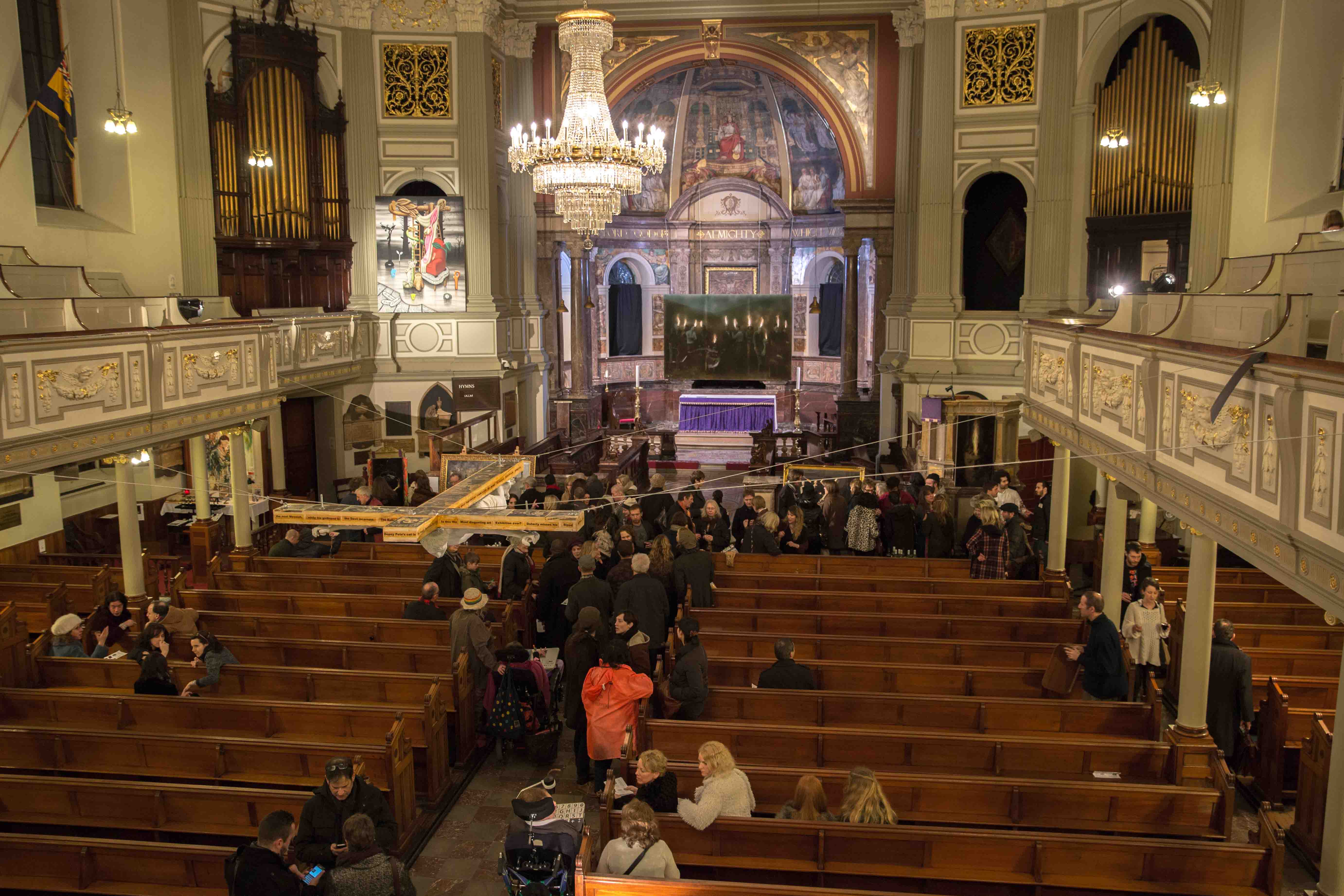 'Head of Christ' by Charlie Mackesy 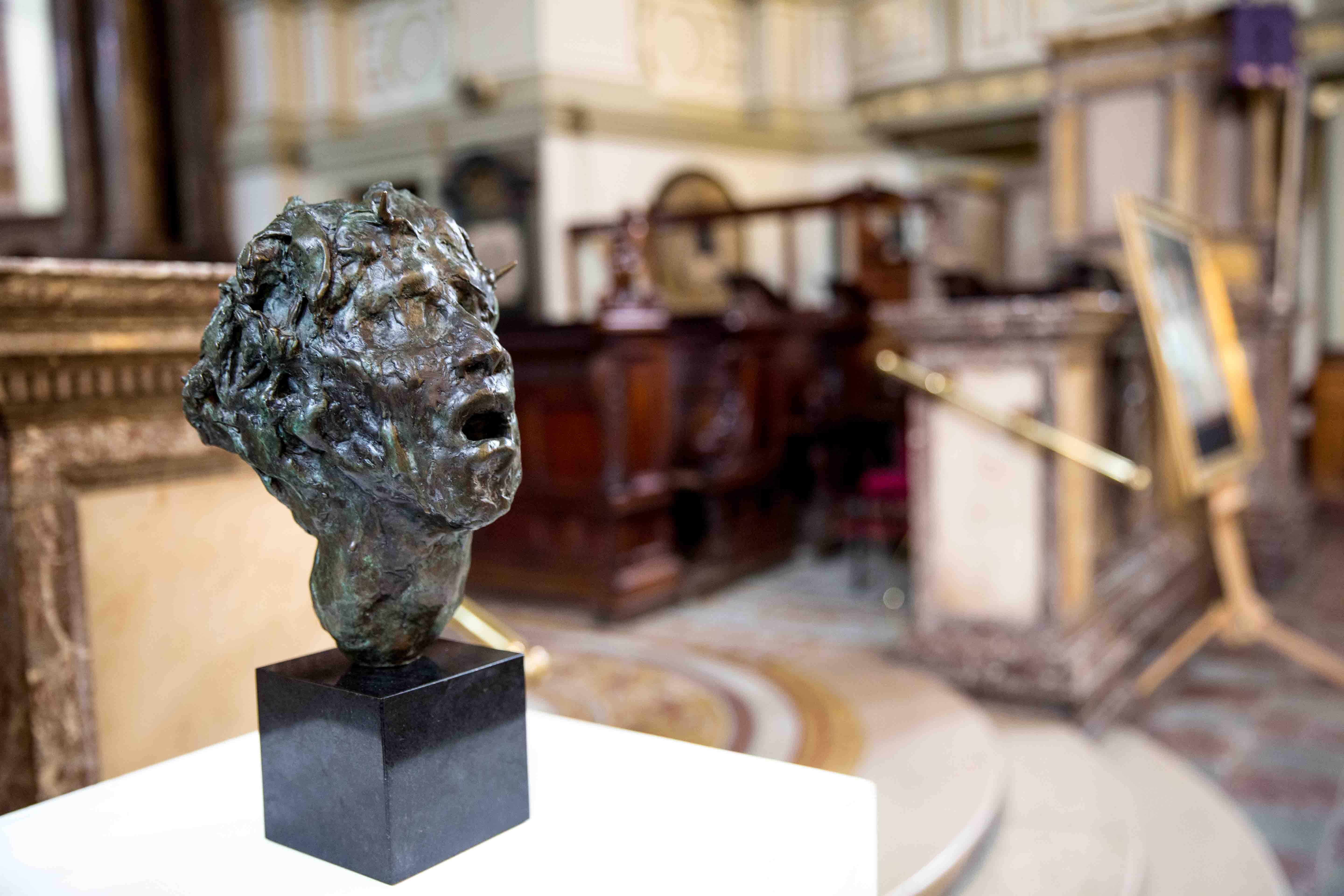 'As it Was in the Beginning' by Ben Moore 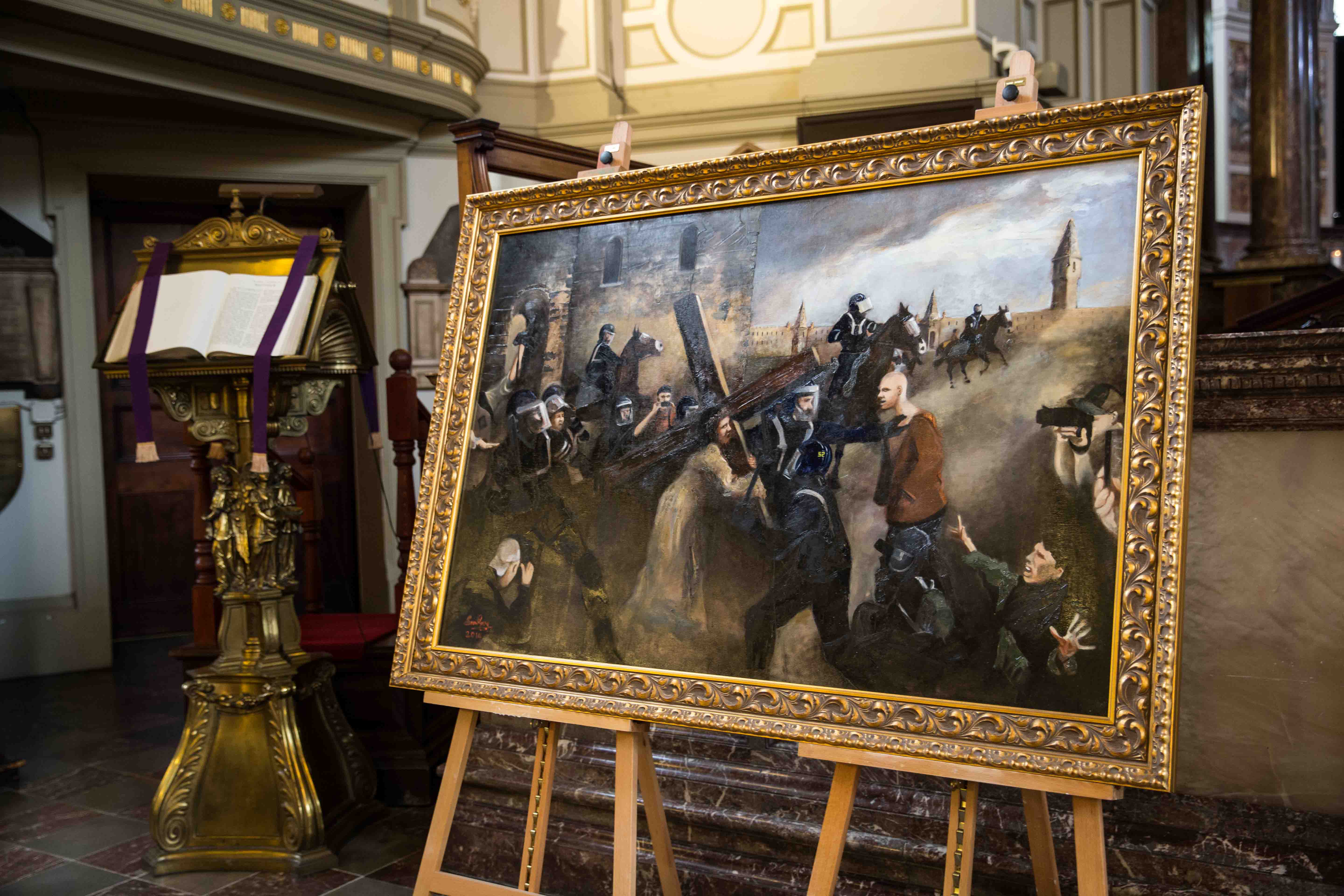 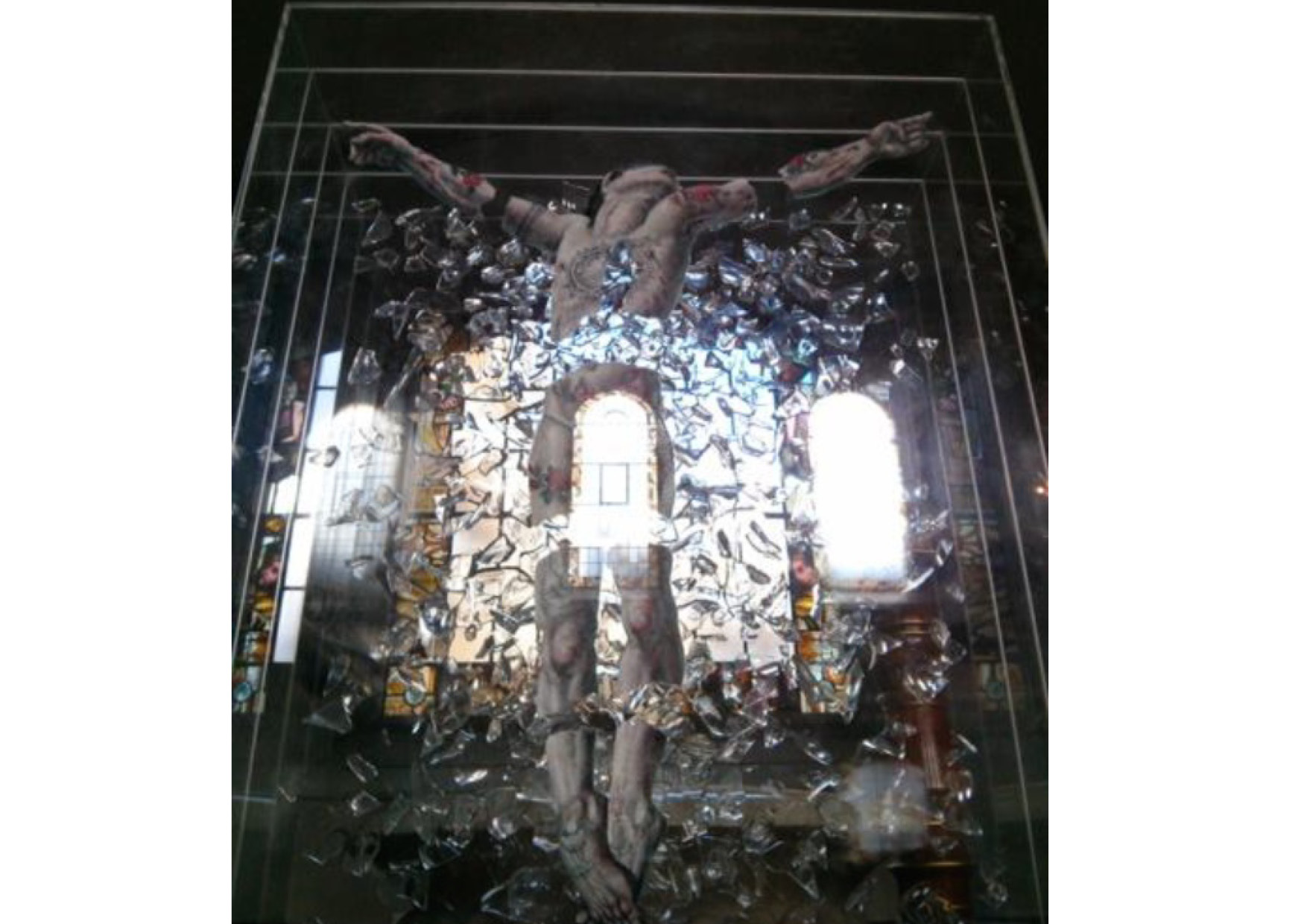 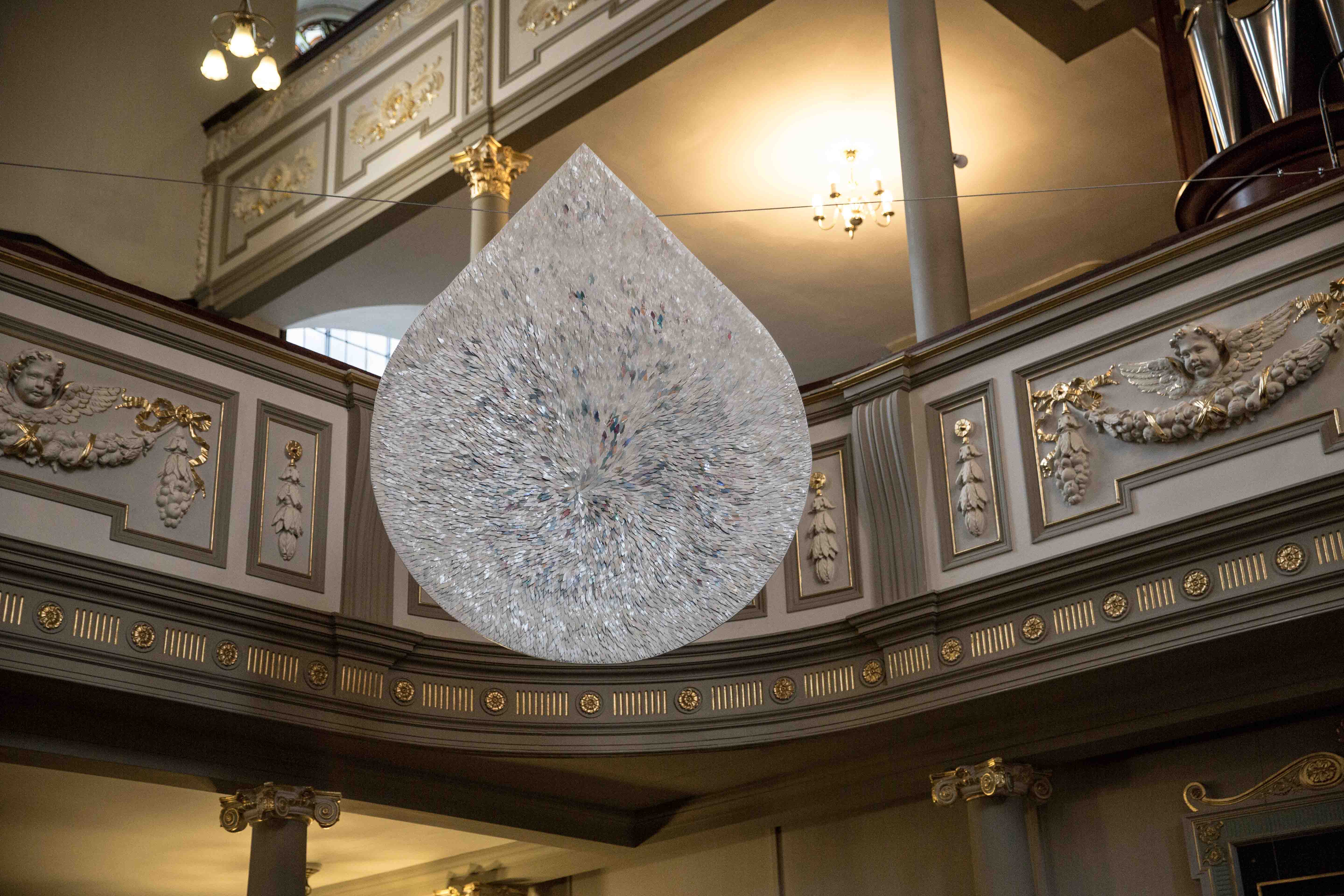 For all sales enquiries and interview requests please contact: info@artbelow.org.uk

'This is my body' By Charlotte Bromley Davenport, Photographic Print, Framed, Edition of 5, 735 mm x 996 mm

'Crown of Thornes' by Marguerite Horner, Oil On Linen, 50x50cm

'Comrade of the sky' by Wolfe Lienkewicz, Charcoal on canvas, 10 ft by 12 ft

'For Pete's Sake' by Nick Reynolds and Schoony, 8 foot by 7 foot by foot, Fibre glass with marble finish, nailed onto wooden cross.