Curator and Founder of Art Below

Ben Moore has had over 10 years experience working with artists, museums, universities, charities, arts organisations, and corporates, initiating and managing partnerships to deliver new public arts projects.
In 2006 he founded Public Arts Organisation Art Below.  With a wide range of international artists and its various campaigns in cities worldwide, the organization has an important position within the movement of contemporary art in public space.
He has produced and curated more than 50 public exhibitions in London, Tokyo, Berlin and Los Angeles working with international and British artists including Turner Prize Winners and Royal Academicians. ﻿
Ben's vision: To enrich the everyday life of the traveling public by giving fresh insight into the very latest in contemporary art whilst at the same time providing a platform for emerging and established talent.
Curator and Founder of Art Wars

Using life-sized Stormtrooper helmets as a blank canvas artists are invited to transform the science fiction icon into a piece of artwork.   'Turning the Dark side onto the Art Side'   Art Wars was unveiled at the Saatchi Gallery during Frieze week in October 2013 featuring 20 artists including Damien Hirst, Jake and Dinos Chapman, David Bailey, Alison Jackson, Joana Vasocncelos and D*Face and was initiated by the British curator and artist Ben Moore.  Proceeds from the exhibition went to the Missing Tom Fund,  set up by Moore to support the ongoing search for his brother Thomas Moore  who has been missing since 2003.  The sell out exhibition was a massive success attracting media attention world wide and pushing forward the cause and heightening awareness of Missing Tom.  Over the last 2 years we have welcomed over 50 new artists to the collection, featured at four major London Art Fairs, travelled to Dubai and Gothenburg Sweden and been showcased across advertising space throughout the London Underground.   www.missingtom.com     www.artwars.net

'Stations of the Cross'  2014 and 2015
Curated by Ben Moore 'Stations of the Cross' is an exhibition of artists representations of the Passion of Christ in London's St.Marylebone's Parish Church for 40 days, in 2014 and 2015  in support of the Missing Tom Fund.
The works were also on display to the public on billboard space across major London Underground Stations.
Artists include Mat Collishaw, Polly Morgan, Sebastian Horsley, Wolfe Lenkiewicz, Antony Micallef, Charlie Mackesy, Paul Benney, Robin Mason, Gavin Nolan, Zavier Ellis and Paul Fryer.     See  Stations of the Cross
'Thatcheristic' April 2013
On the 17th April to co-inside with Margaret Thatcher's funeral,  'Thatcheristic' opened  at London's Gallery Different.  10 UK based artists including  Peter Kennard, Harry Pye, Nasser Azam, Johan Andersson, Sarah Maple, Matt Small, and Carne Griffiths have been invited to reveal their depictions in portrait form to the general public.  There was controversy surrounding the issue of featuring these works on the London Underground.    See Thatcheristic
'The Peace Project' October 2012
'The Peace Project was a collaboration between peace activits and artists including Alison Jackson, Billy Childish,  kennardphillipps, and Schoony.
The exhibition at London's Gallery Different  featured the 'Peace Plinth'  which stood on London's Parliament Square since 2009 as a protest against the Iraq / Afghanistan war.
Proceeds raised went to The Halabja Community Playground Project in Northern Iraq. The art works in the show also formed part of Art Below's billboard exhibition at Regent's Park tube station throughout October.
See Peace Project
'The Peace Plinth'  April 2012
Ben Moore commissioned The 'Plinth of Peace', to be unveiled in Los Angeles at the opening night of The BritWeek Art Exhibition at the historic Farmers and Merchants Bank on 12 April 2012, coinciding with Downtown LA Art Walk  See Peace Project
'Art in Motion' April 2011
Liverpool Street Underground Station, The Future Gallery, Covent Garden
A series of short films showing different artists actually in the process of creating their own work.   The Art in Motion Portfolio boasts a range of talent including 'The Three Classicists', Slinkachu, Philip Levine,  Schoony and award winning video Artist Max Hattler
These films were projected on digital projection screens  (2 m high x 3.7m wide) on the Westbound Central line platform at Liverpool Street, and at the Future Gallery in Covent Garden
See Art in Motion
'What would London do without eccentric lateral thinkers such as Ben Moore?'
The Evening Standard 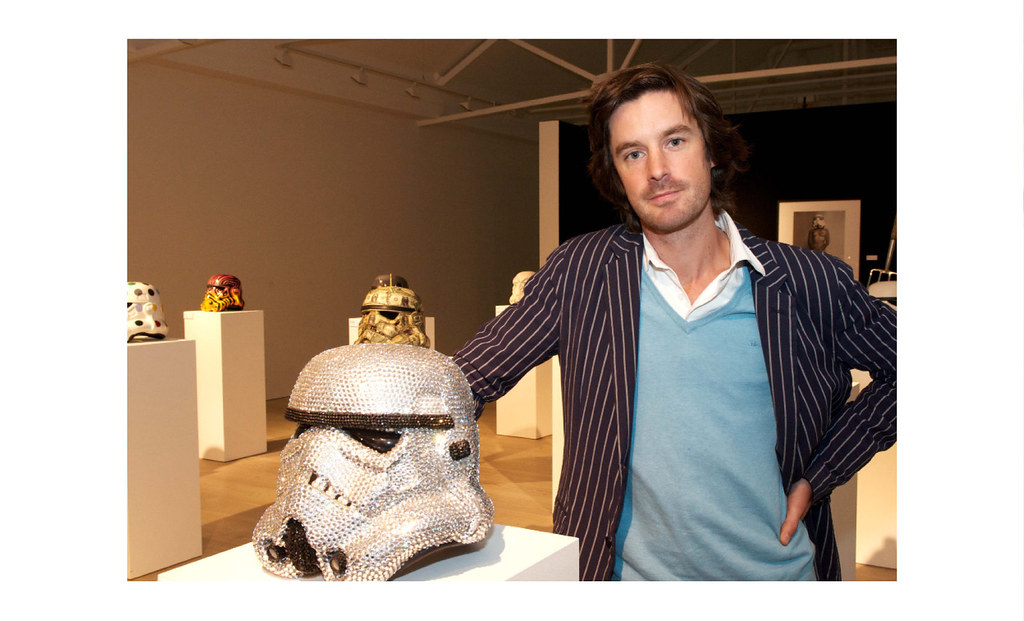